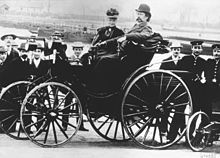 Motorists in Germany at the end of the 19th century: Bertha Benz and Carl Benz

As drivers , motor vehicle driver , car driver the person (is driver ) indicates that a motor vehicle (eg, car , truck or bus leads) or deflected. In Switzerland, the terms motorist and car drivers used. A driver who drives a passenger car is colloquially referred to as a motorist . In addition to Automobilist, the Germanized form Autler was also used at the beginning of the 20th century , but is no longer used.

The driver comes into contact with the laws governing road traffic in an inconsistent manner. In Germany, for example, these are the StVG , StVO , StVZO and FeV . In Austria it is the KFG , the FSG and the StVO . Motor vehicle driver i. S. d. § 18 StVG is who drives the vehicle and has actual control over the wheel. Motor vehicle driver is someone who drives a motor vehicle under his own responsibility, d. H. performs essential operations that are necessary so that the intended driving forces of the motor vehicle to move can act on the same z. B. coupling, steering, braking, accelerating, starting, releasing the handbrake. Drivers who are employed by a haulage company earn money driving trucks.

Until 2018, Saudi Arabia was the only country in the world where only men were allowed to drive motor vehicles like cars. Until 2018, the ban was broken by a few women. At the end of 2014, the Saudi Arabian government announced that it would allow women aged 30 and over to drive a motor vehicle alone in future. Permission was then given to women in 2018.

Bertha Benz drove a vehicle for the first time in August 1888 over a distance of around 107 kilometers from Mannheim to Pforzheim and was the first person to undertake such a long-distance journey.