Andrussov's signature on an April 25, 1931 report on the manufacture of HCN 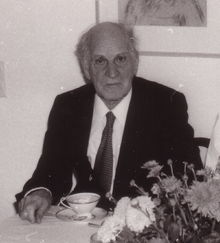 Leonid Andrussow (born November 28, 1896 in Riga , † December 15, 1988 near Paris ) was a German chemical engineer. He developed the named after him method for the production of hydrocyanic acid by the oxidation of ammonia and methane.

Leonid Andrussow was born in Riga, the capital of Latvia. His father Woldemar was a lawyer, his mother's name was Caroline Ulmann, and they had 9 children. The name "Andrussow" is probably the Russified form of the Swedish name "Anderson". He graduated from the University of Riga with a degree in chemical engineering. During the times of the Russian Revolution he fought against the communists. After his capture, he was sent to a Cheka prison in Moscow. The release was probably made possible by relatives in Germany. He went to Berlin-Charlottenburg and received his doctorate in chemistry from the Technical University of Charlottenburg in 1925 under Walter Nernst . In 1927 he began his practical work in the ammonia laboratory of BASF , then IG Farben , in Ludwigshafen-Oppau and lived in Mannheim. From 1946 he lived in Grenoble, later in Paris. He also worked for the Zimmer company in Frankfurt am Main. From 1975 to 1981 he lived in Mannheim-Feudenheim, but then moved back to Paris. He died near Paris at the age of 92.