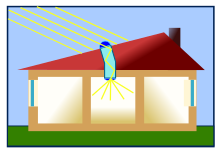 The light tube enables z. B. lighting with natural light in a windowless room of a house.

A light pipe is a daylight system that directs natural light ( sunlight and moonlight ) through a hose or pipe into the interior of a building . Other terms for this are hollow light guides , light tunnels and light chimneys .

Daylight tubes (or light tubes, sun tubes or skylights) have their roots in Australia. In the early 1980s, an Australian inventor was working on a further development of the classic skylights. His concept included a system for "capturing" daylight on the roof of a building, which is diverted to a diffuser in the ceiling by a highly reflective cylinder. The first patent was filed in 1986 and four years later a group of Sydney entrepreneurs began manufacturing and distributing this product. The first system was sold in 1991 and became the best-selling skylight in Australia. In 1992 the company expanded to North America and other manufacturers quickly recognized the growing market. There are now a number of manufacturers who manufacture this system in different sizes and types and sell them worldwide.

A transparent glass or acrylic dome is placed on the roof or on the outside wall of the building . From there, the captured light rays are forwarded into the interior of the building via a pipe with very good reflective properties. In the room to be illuminated, a diffusing glass is installed on the ceiling , which distributes the introduced light.

One of the three light tubes that supply Berlin Potsdamer Platz train station with natural light.

The light tube in the underground.

The light tubes allow dark or windowless rooms (for example stairwells, bathrooms, corridors, living rooms and offices) to be illuminated with natural light without additional energy having to be used, as is the case with conventional lighting . Depending on the duration of sunshine , light tubes can improve the energy balance of a building and reduce CO 2 emissions. In addition, the irregular fluctuations in brightness of natural light (cloud cover) meet human viewing habits.

The larger the diameter of the reflective tube, the further the sunlight can be directed into the building. Some manufacturers indicate a possible pipe length of over 20 meters.

There are essentially four factors that determine the light output:

Some systems do not transmit the ultraviolet radiation or the heat radiation of daylight. This is achieved through the use of a special material that only reflects visible light (wavelength between 380 nm and 780 nm). This prevents the rooms from heating up. In addition, the light tubes can be connected to the ventilation system .

Since natural light is not always available, the lighting intensity is subject to fluctuations. For times with little light or in the dark (such as at night), an electrically operated light can usually be built into the light tube.

In the event that the sunlight is too strong, some systems offer covers or blackout options - so-called daylight dimmers.

A thermal insulation unit for daylight systems has now been developed. By using multi-pane glasses with argon filling, a U-value of 0.8 W / (m 2 · K) is achieved. This means that daylight systems can also be used in passive or low-energy houses.

A similar technique was developed by Australian scientists at the University of Technology, Sydney and is expected to come onto the market under the name "Fluorosolar".

The sunlight can be sent into the light shafts or dark rooms by mirroring and bundling with one or more heliostats (example: construction project in Rattenberg in Tyrol ).