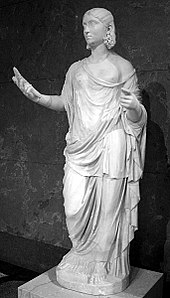 Statue of the fruit-bearing Ceres from the Louvre

The Ludi Cereris (also Cerialia ; Games of Ceres ) were in the Roman calendar from 12 to 19  April as the official Feriae stativae grain goddess Ceres dedicated and joined directly to the megalesia , which ended on 11 April. The Ludi Cereris, which last several days, have been around since the third century BC. Occupied.

The last day of Ludi Cereris was also the day of dedication of the three-cell temple of Ceres, which you can still find with an Etruscan layout between Circus Maximus and Aventine from 496 BC. Was built. The dictator Postumius is said to have advertised a temple because of a famine on the instructions of the Sibylline Books of Ceres, which finally opened on April 19, 493 BC. Was consecrated by the consul Spurius Cassius . The temple offerings were made exclusively to Ceres. In 31 BC The temple burned down in the 4th century BC, which Augustus then renewed and Tiberius consecrated.

As part of the festival program, among other things, the since 186 BC In the BC, animal hunts took place in which foxes with burning torches attached to their backs were exposed in the Circus Maximus . For this occasion, the audience should wear white clothing as much as possible. Ovid mentioned in this context that the Ludi Cereris began one day after the early sunset of the constellation Orion .