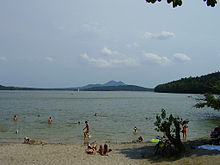 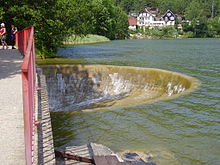 The Máchovo jezero (German: Mácha-See ; earlier also: Velký Dokský rybník , German: Hirschberger Großteich ) was for a long time the largest pond in Northern Bohemia with 350 hectares of water. Today its area is only 278 ha. It is located near the town of Doksy (Hirschberg am See) in Liberecký kraj in northern Bohemia .

In German usage, the translated term Mácha-See is often used for the lake .

The pond was created in 1366, during which Emperor Charles IV laid hands on it himself. It is located in a headwaters and is fed by two streams; the Okenský potok flowing from the Čepelský rybník ( Tschöpelteich ) and the Břehyňský potok coming from the Břehyňský rybník ( heather pond ) . Another place on Máchovo jezero is Staré Splavy (Thammühl), belonging to Doksy since 1850 , where the dam of the pond is located. The outlet of the pond is the Mlýnský potok (Mühlbach), which flows into the Novozámecký rybník (Hirnser Great Pond), which is now largely swampy.

In honor of the Czech romantic Karel Hynek Mácha , who liked to visit the area around Bezděz (Bösig), which is also called Máchův Kraj after him , and has described it several times, the pond was named Máchovo jezero, previously the names Velký rybník ( Large pond) or Hirschberský rybník (Hirschberger See).

In the pond there are 2 islands, of which the Myślin (Mouse castle) called, the remains of the fortress "Myßlin" bears (Myší hrádek). The legend about the robber baron tank , which Charles IV starved to death in the Mouse Castle because he acted so cruelly against his subjects , is around the complex, as well as that on the neighboring mountain Klůček (Klutschken) . It is said that after a drought he gave nothing to his subjects from his bulging granaries. In the summer, however, the mice reproduced so much that they ate the last of the farmers away. The farmers became so angry and stormed the granary and chased the robber baron and the mice to the lake. There he found a boat and fled to his castle in the lake. But the mice were hunted so much by the farmers that they swam behind the knight and populated the castle on the island and ate everything up, so that the cruel knight himself had to starve to death. Today this island is protected.

Máchovo jezero not only has popular camping centers, numerous water birds nest on its banks and there are protected areas for rare plants.