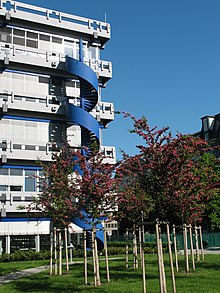 Main building of the MZES in square A5

The Mannheim Center for European Social Research (MZES) is an interdisciplinary research institute of the University of Mannheim founded in 1989 . It is located in the Mannheim square A5 not far from the Mannheim Palace .

The institute is dedicated to researching the social and political development of Europe . The focus is on comparative European research and the investigation of the European integration process . The MZES mainly conducts basic research, which is financed by third-party funds from the German Research Foundation , foundations for scientific research and research funding from the EU. In addition, the MZES, which works closely with the Faculty of Social Sciences at the University of Mannheim, is also dedicated to training young academics. The MZES currently employs around 80 scientists and around 60 research assistants , making it the largest institute at the University of Mannheim and the largest social science research facility at a German university.

In 1999 the four work areas were reduced to two:

The director and the heads of the two work areas together form the board of the institute. The Executive Board and the Institute are in their work by a college advised. The institute's research program is drawn up for three years and reviewed by an international scientific advisory board. An annual report provides information on the institute's activities .

The director (until 1999: managing director) is elected for a term of three years by the college of the institute.

The directors are supported in their work by the managing director (until 1999: executive assistant). Andreas Weber held this position from 1989 to 1997 and Reinhart Schneider from 1998 to 2009. Philipp Heldmann has been managing director since 2010.