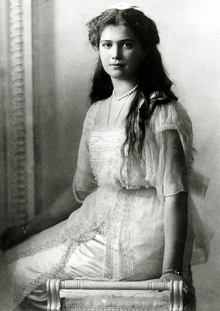 Maria was the third child of Nicholas II and his wife Alexandra, previously Alix von Hessen-Darmstadt . She is described as a happy, introverted and eager to learn girl who loved to draw. When Anastasia was born, the tsarina was somewhat depressed about the fact that she had again given birth to no heir to the throne, but the lady-in-waiting who was present cheered her up by noting that a "big pair" ( Olga and Tatjana ) and a "little pair" (Maria and Anastasia ) were present. The family adopted this name when they spoke of the girls. 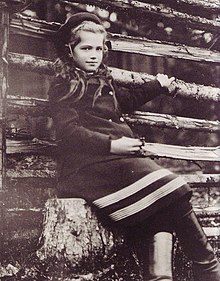 At a young age, Maria felt unloved and insecure, as evidenced by a letter from her mother assuring Maria that she was loved. As a young girl she suffered from being overweight, which grew together with puberty. It was also she who looked more like her grandfather Alexander III. came and had also inherited his physical strength. It is said that as a young girl she often picked up her uncle "Ernie", Grand Duke Ernst Ludwig of Hesse . Anastasia was her confidante among her sisters. When her sister Olga refused to be engaged to Crown Prince Carol of Romania , while he was visiting Russia in 1914, he asked for the hand of Mary, but her parents refused because they thought their daughter was too young.

During the First World War , she was too young to be a nurse like her two older sisters. However, like her younger sister Anastasia, Maria became the patroness of a hospital (Grand Palace Infirmary).

Death and finding of the remains 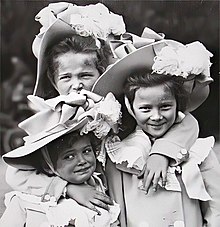 Maria (left) with her sisters Olga and Tatjana, 1903

When Alexandra decided to accompany her husband to Yekaterinburg , she decided to take Maria with her, while the others had to stay behind in Tobolsk because Alexei had injured himself while trying to slide down the stairs of the house with a sledge. An attack of hemophilia made him too weak to travel. Since Maria was the sturdiest daughter, she accompanied her parents. At first she slept with her parents in a room that she left after the rest of the Alexei family arrived. While in custody, she did not find it difficult to contact the guards. She liked to talk to them, asked them about their lives and their families. It is said that Maria was in love with one of the guards and that he was in love with her. On her birthday he brought her a cake and kissed her on the cheek, which particularly outraged the tsarina. The tsarina and her daughters had hidden pearls and other jewelry with them in order to be prepared for an eventual escape, since all other possessions had been confiscated. This jewelry was sewn into their corsets by the girls and the tsarina, only Maria was not allowed to do this because of her misconduct, as the tsarina called it. It has been proven and historically documented that Maria was the only one who did not wear a pearl belt when she was shot. The soldier who kissed Maria while guarding the tsar's family later put this on record and was removed from the house after the incident. She was 19 when she and her family were shot and killed in the Villa Ipatiev near Yekaterinburg on the night of July 17, 1918 .

In the summer of 2007, near the former Ganina Jama mine shaft, in the Koptjaki Forest, a little away from the site of the remains of the remains of the tsarist family, the bone fragments and teeth of a young girl aged 17 to 20 and a boy aged Found 10 to 13 years. The bones were examined in Yekaterinburg under the direction of the Kremlin and foreign specialists. On April 30, 2008, the result of the DNA test became known. This confirmed that the bones are undoubtedly the bones of Maria and her brother Alexei. 90 years after the assassination of the tsarist family, their fate has been finally clarified.

In 2000, she and her family were canonized by the Russian Orthodox Church .