This article is about the Taoist goddess. For more meanings, see Mazu (disambiguation) .

She is also known as Tianhou ( 天后 , Tiānhòu , T`ien-Hou , Jyutping Tin 1 hau 6 ; viet. Thiên Hậu ), which means " Queen of Heaven". It is to be strictly distinguished from the goddess Doumu , the "goddess of the bushel" or the "pole star", which is also called the goddess .

Māzǔ was born around 960 as the seventh daughter of a fisherman from the island of Meizhou in Fujian Province with the name Lin Moniang ( 林默 娘 , Lín Mòniáng ). After her birth, she is said not to have screamed, which earned her the name "Silent Girl".

Numerous legends tell of Lin's miracles. According to one of them, she is said to have rescued her family from severe distress by using supernatural powers: When her father and brothers were surprised by a typhoon out at sea in mortal danger, Lin fell into a dream -like or trance-like state in which they drowned their loved ones saw. But she managed to catch her brothers with her hands and her father with her mouth. Because of Lin's motionlessness, her mother, who had remained on land with her, believed that her daughter had also died. Concerned for the mother's welfare, Lin gave a sign of life in the form of a weak scream. As a result, however, they lost their father, who had been kept in their mouths, who then perished at sea. 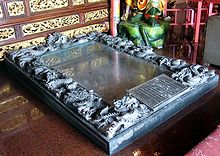 Lin herself died an early death as a virgin : According to one tradition, she drowned while swimming in search of her missing father at the age of 17, according to another, at the age of 27 she was immediately raptured into heaven while climbing a mountain.

Transformation to the goddess

In any case, she was then included in the Daoist pantheon of gods. As the patron goddess of fishermen and sailors, she is naturally particularly revered in coastal and port cities. In terms of religious history, it is a further expression of the so-called mother archetype , i.e. the preserving and protective woman.

Clothed Mazu statues in the Temple of Lukang , Taiwan 2004 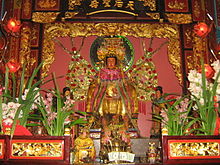 Mazu Shrine in the Temple of Los Angeles , USA 2006

There are around 1,500 Māzǔ temples in 26 countries worldwide. The center of the cult is naturally Lin's birthplace, the island of Meizhou .

In Hong Kong , the sea goddess Māzǔ, usually known as “Tin Hau”, is worshiped in around 102 temples. "Tin Hau" ( 天后 區  /  天后 区 , Tiānhòu Oū ) is also an unofficial name for a geographically not precisely defined district in the east of Causeway Bay . Since the opening of the Island Line of the MTR subway line on May 31, 1985, there has been a subway station called " Tin Hau Station " ( 天后 站 , Tiānhòu Zhàn ) on Hong Kong Island , which is named after the nearby historic Tin- Hau Temple of Causeway Bay ( 銅鑼灣 天后 古廟  /  铜锣湾 天后 古庙 , Tóngluó Wān Tiānhòu Gǔmiào ) east of Victoria Park is named.

There are three Tin Hau temples in Macau , one each on the Macau Peninsula (Macau), in Coloane and in Taipa. The city even owes its name to the Queen of Heaven, which goes back to the A-Ma Temple, consecrated to the goddess Mazu in 1448.

In Chinatown in Singapore there is an altar for Mazu in the Thian Hock Keng temple complex .

Another center of māzǔ worship are the Chinatowns in the United States. For example, the oldest Daoist temple in the United States, built in San Francisco in 1852, is dedicated to the sea goddess. Another well-known shrine is located in the Chinatown of Los Angeles , which finished in 2005 and tourist spot Chùa Bà Thiên Hậu , who is also the seat of the Sino-Vietnamese charity Camau Association of America serves.

Many geographical place and street names in China and Taiwan are named after the goddess Māzǔ, for example the Matsu Islands in the Taiwan Strait .