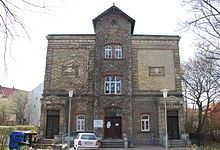 House Mummental 2 is a listed building in the city of Quedlinburg in Saxony-Anhalt .

It is located in the eastern part of the historic Quedlinburg old town, south of the Mühlgraben on the west side of the Mummental street. The building is registered as a school in the Quedlinburg monument register.

Boys and girls school of the old town Heiliggeisthospital; 1869, partially plastered, originally two-storey quarry brick building with a length of 9 + 2 axes in strictly regular, late classicist forms with an entrance and staircase projection to the east of 5 x axis width, in 1892 expansion to the west by 5 x axes with staircase and a total increase in the quarry stone building with half-timbered upper floor In the sense of the typical country house style of the time, as a result of this, a mighty basement building with a total of 16 (14 + 2) axes length in the solid floors and 42 containers (18 x axes) in the 2nd half-timbered upper floor with hipped roof closure of urban spatial dimensions In 1990 as a Mummental primary school in continuous use, then continued to be used as a community college, district library and social welfare office, in 2004 the community college was closed due to static construction defects. , 2011 Relocation of the district library to the Carl Ritter educational center (see Heiligegeiststr. 8, 8a), 2019 planning for static consolidation and conversion to a residential building; the former St. Spiritus Hospital boys and girls school, with its 135-year use as a basic and adult education center building, is one of the testimonies to the history of education in the World Heritage City of Quedlinburg

Description of the building: Mixed construction of a monolithic core structure with a basement with a half-timbered upper storey, the eastern gable side, three-storey quarry stone staircase construction set off like a risalit, partly plastered, the central portal axis additionally as a central risalit with a gable roof and trussed ornamental trusses as a vertical component, two lateral symmetrical portal porches with strong plastered porches Two-phase main structure to the west (9 + 5 axes) as a fourteen-axis, three-storey extension, the second upper floor tied in half-timbered with profiled beam heads and lateral struts as a half man, the roof is a purlin roof with a triple chair, the window axes in the solid floors consistently with segmental arches executed, in the half-timbered upper floor as standing rectangular formats; the interior is developed with two hips with a central corridor, to the north-eastern, two-lane straight solid staircase with a continuous central cheek wall and intermediate landings, there is a second massive access staircase with a two-way straight staircase with intermediate landings on the 4th extension axis from the west; this staircase is accessed from the south through a double-winged wooden gate with skylight opened up.

Cultural monuments in the street Mummental in Quedlinburg