Museum for Prehistory and Early History of Thuringia 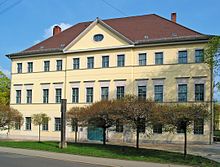 West view of the museum

The Museum of Prehistory and Early History of Thuringia in Weimar combines a museum with a 1000 m² exhibition area and the Thuringian State Office for Monument Preservation and Archeology under one roof, which is responsible for the museum. The address of the museum is: Humboldtstraße 11, 99423 Weimar.

The initiative to found a museum came from the Natural Science Association in 1888. Shortly after it was founded, the museum gained supraregional importance thanks to Pleistocene finds from the Ilm valley around Weimar. The house, which soon passed into municipal ownership, increasingly provided an overview of the geological, natural history and historical conditions in the Grand Duchy of Saxony-Weimar-Eisenach . The Weimar City Museum itself has its roots in this initiative.

Under the direction of Günter Behm-Blancke , the museum became a center of archaeological and Quaternary paleontological research after the Second World War .

400,000 year old tools and hunting remains of Homo erectus from Bilzingsleben as well as the Paleolithic finds from the travertine layers of Weimar-Ehringsdorf will be presented . Numerous originals of the most important excavations from the Neolithic to the Middle Ages - including unique finds from the Germanic princely grave of Haßleben and from the Germanic sacrificial moor in Niederdorla , reconstructions and installations are part of the exhibition. Another turning point was the establishment of the Institute for Quaternary Paleontology under the direction of Hans-Dietrich Kahlke , which was affiliated to the Senckenberg Research Institute in 2000 , so that numerous artefacts are now located there. The remaining core of the collections in the Thuringian Museum is the anthropological collection with the important remains of hominids from Weimar-Ehringsdorf and Bilzingsleben, where excavations have taken place since 1992.

Commons : Museum of Prehistory and Early History of Thuringia  - collection of images, videos and audio files