Badge of the NUWSS

The National Union of Women's Suffrage Societies ( NUWSS ), whose female members are called suffragists (not to be confused with the suffragettes ), was an association of women's suffragettes in the United Kingdom from 1897.

Other prominent women suffrage activists of the early movement were:

With the members Barbara Bodichon, Sarah Emily Davies , Frances Mary Buss , Dorothea Beale , Helen Taylor , Elizabeth Clarke Wolstenholme Elmy and Elizabeth Garrett Anderson , the London Kensington Society , founded in 1865, was able to gain great influence. They organized the first call for women’s suffrage by Parliamentarians John Stuart Mill and Henry Fawcett before the UK Parliament . When Parliament voted against, the Kensington Society reorganized in 1867 to become the London Society for Women's Suffrage . After unofficial alliances with other women's suffrage societies from Manchester, Edinburgh and other cities, it was reorganized again and stood as the National Society for Women's Suffrage under the direction of Lydia Becker. This alliance preceded the later official National Union of Women's Suffrage Societies.

The National Union of Women's Suffrage Societies was based on many smaller women's suffrage societies. Their establishment was discussed in October 1896 at a conference of about 20 of these societies. In the literature, the founding date is often given as 1897, but there are also different dates. 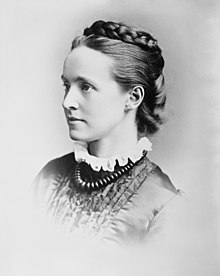 Millicent Fawcett (1913),
President of the NUWSS

According to the Encyclopædia Britannica (1911), more and more individual local societies have merged since 1867. After various reorganizations, an association of all women 's suffrage societies was formed, which since 1896 has called itself the National Union of Women's Suffrage Societies . On the occasion of the British elections there was at times a major merger of several of these companies as early as 1895. Later in 1896 a political committee, the Combined Subcommittee, was formed to put pressure on key members of Parliament. In October 1897, after 12 months at a congress in Brighton, the NUWSS was organized in alliances. The Combined Subcommittee was reformed to the NUWSS Committee in 1898.

In 1910 the NUWSS had 200 women's suffrage societies. By 1913 it could more than double, 449 companies. These were always decentralized and organized independently in sixteen associations, the London Society and six university women's societies. The statutes of the NUWSS forbade its member societies, however, their own political activities and alliances.

Since the founding of the National Union of Women's Suffrage Societies in 1897, Millicent Fawcett was its president until 1919. The organization acted exclusively peacefully under their leadership and followed a constitutional policy: it was only attempted to convince the MPs of the right to vote for women. Because of this rather slow method, several member societies split off in 1903 and founded the activist and militant Women's Social and Political Union (WSPU), which was led by Emmeline Pankhurst and her daughter Christabel.

Since 1908 the organ of the NUWSS, The Common Cause , has been published.

The United Kingdom gave women the right to vote in 1918, although not in the same way that men were entitled to vote at the time. In the following year, the organization renamed itself the National Union of Societies for Equal Citizenship and, under the leadership of Eleanor Rathbone, campaigned for the rights of disadvantaged women and gender-neutral elections.

A camp at Kineton during the Great Pilgrims' March 1913

The NUWSS organized their first major action march on February 9, 1907, which became known as the " Mud March " (German: mud march) of the suffragists. More than three thousand women marched from the Hyde Park corner to the beach to demand the right to vote for women. It was the largest women's suffrage demonstration in the UK to date. Because of the heavy rain and the soaked and mud-splattered women, the demonstration was given this name. Other major events followed later, the important one being the “ Great Pilgrimage” of June / July 1913, in which groups of women from all parts of the country marched for weeks to London, advertising for women's suffrage on the way and a crowd of 50,000 participants in Hyde Park gathered for a rally.

Until 1912, the NUWSS was not allied with any party; she supported individual parliamentary candidates in their election if they supported women's suffrage. This position changed when the Conciliation Bill was presented in 1911. The law was supported by a majority but did not have enough time to pass. The Liberal government relied on the nationalist Irish Parliamentary Party for a majority vote and insisted that there should instead be more time for another Irish Home Rule bill, whereupon Unionist spokesman Sir James Lowther opposed women's suffrage.

From 1903 the Labor Party was tied into an alliance with the Liberals and the leadership was divided over the problem of female emancipation. Although a party conference in 1913 agreed to reject an electoral law that would not extend voting rights to women, the party changed that stated intention after a campaign in northwest England. In the years leading up to the war, however, the party consistently supported women's suffrage without achieving a majority in the lower house.

Fawcett, a Liberal, got very angry at the party's delaying tactics and helped Labor candidates against the Liberals during election times. In 1912 the NUWSS set up a committee called the Election Fighting Fund (EFF), headed by Catherine Marshall. The committee supported Labor and intervened in four by-elections in 1913-14; Labor did not win an election, but the Liberals lost two of them.

The NUWSS tried to put pressure on the Liberals by supporting Labor because the future of the Liberals rested on the Labor Party remaining weak.

NUWSS during the First World War

The NUWSS was split between the majority war faction and the minority of the war opponents. During the war the association set up an "employment register" so that the positions of those involved in the war could be filled. The NUWSS financed hospital facilities for women, which only employed female doctors and nurses. They helped during the First World War in France, such as the Scottish Women's Hospitals for Foreign Service.

The NUWSS supported the Representation of the People Act 1918 (Electoral Reform Act of 1918), which had come about through a "Speaker Conference" (1917), although it did not grant the universal, equal suffrage, which the organization had fought for. She had to accept that at that time there were one and a half million more women than men in the country and that even the advocates of women's suffrage wanted to maintain a male majority.

Activities after the First World War

Eleanor Rathbone as a speaker (around 1910)

In 1919 the NUWSS was renamed the “National Union of Societies for Equal Citizenship” and was continued under the leadership of Eleanor Rathbone . It focused on a campaign for equality of suffrage, which was then achieved in 1928. It then split into two associations, the National Council for Equal Citizenship, a short-lived group engaged in further campaigns for equality laws, and the Union of Townswomen's Guilds, which specialize in education and welfare for women concentrated and has continued to this day.

Important members of the NUWSS