The marchers leave Drayton for Banbury

The Great Pilgrimage of 1913 was a kind of star march of the suffragettes in Great Britain who wanted to promote women's suffrage in a non-violent way. It was organized by the National Union of Women's Suffrage Societies (NUWSS). Women marched into London from all over England and Wales and around 50,000 people took part in a rally in Hyde Park on July 26th .

Badge of the NUWSS

The idea for the Star March was developed by Katherine Harley during a sub-committee meeting on April 17, 1913 in London. Plans for this were quickly worked out and published through the NUWSS magazine Common Cause . There were six routes to take the marchers to London, to a rally in Hyde Park on July 16, 1913. There was the great north route from Newcastle upon Tyne and East Anglia, the Watling Street route from Carlisle , Manchester and North Wales, the West Country Route from Land's End and South Wales, the Bournemouth Route , the Portsmouth Route and the “ Kentish Pilgrim Route”.

A “group of pilgrims” faces the photographer

The first women marchers set out on June 18, planning to move from Carlisle and Newcastle to London in six weeks. Each delegation carried banners stating that the march was law-abiding and peaceful. This should make the attitude of the NUWSS in contrast to the militancy of the WSPU clear. Women of all classes joined the march.

The march was organized in every detail. Advance information provided the marchers with precise directions and details about accommodation and supply options. A single piece of luggage per person could be transported. There were daily attendance checks and the marchers were asked to wear rosettes in green, white and red - not the purple of the suffragettes . Some marchers had horse-drawn caravans with them so that they could be taken care of on the way, while others stayed with local supporters or in other accommodations. Participants were allowed to join the respective march as long as they wanted and could. While some women hiked for six weeks, others could only participate for a short time. Public events were also organized along the route,

Breakfast on the way

In some cases the women were treated in an unfriendly or even violent manner. In Ripon , they were attacked by drunk people who were partying at a local agricultural show. And in Thame there was an attempt to set fire to a marching woman's trailer while she slept in it. A serious incident also occurred three days before the end of a march in East Grinstead . Chunks of earth, tomatoes and rotten eggs were thrown at a small group of women who had to walk through a crowd of around 1,500 people in the main street of the village.

Despite such incidents, the Common Cause announced that the Great Pilgrimage had been a great success:

"The result was nothing less than a revelation, to those who doubted it, of the almost universal sympathy given to the Non-militant Suffrage Cause once it is understood."

(German: "The result was nothing less than an enlightenment for those who still had doubts: There is almost general sympathy for the peaceful suffrage matter, if you understand it.")

Millicent Garrett Fawcett , in 1913 she was 66 years old, took part very actively in the Great Pilgrimage , she marched with the pilgrims from East Anglia, but occasionally spoke at other events and with other marchers. 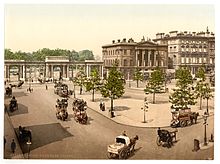 On Saturday, July 26th 2013, the marchers came together for an event in London's Hyde Park. They gathered at predetermined assembly points and then marched to the park, where 78 speakers addressed the assembled from 19 speaker's podiums, a podium for every organization in the NUWSS. According to the Times, around 50,000 people attended the rally.

In 2013 a series of memorial marches was held to commemorate the centenary of the Pilgrimage. Natalie McGrath wrote a play "Oxygen" that was performed by the artists' organization "Dreadnought South West" at venues along the route.