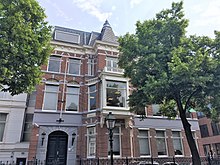 Office in The Hague

The Dutch Language Union listen ? / i ( Dutch for Dutch Language Union ) is an international official organization of the Netherlands , Flanders including the Brussels- Capital Region ( Belgium ), Surinames and the three Caribbean countries Aruba , Curaçao and Sint Maarten , which deal with the Dutch language , language teaching and literature .

Taalunie was founded on September 9, 1980 by the Netherlands and Belgium; As part of the federalization of Belgium, the Flemish government became the sponsor. Suriname has been an associate member since 2004. There are connections to Indonesia as well as to South Africa and Namibia because of the closely related Afrikaans .

The institution strives to integrate the Dutch-speaking community at the linguistic and literary level in the broadest sense:

An important task of the Taalunie is the definition of the official spelling. To this end, it publishes the Woordenlijst Nederlandse Taal (Dutch language dictionary), often called the Groene Boekje (Little Green Book). The organization is also involved in supporting language teaching in the three countries and abroad. In the field of literature, the award of the Prijs der Nederlandse Letteren (Dutch Literature Prize) can be mentioned.

The Taalunie consists of the Committee of Ministers ( Comité van Ministers ), the Interparlementaire Commissie , the Council for the Dutch Language and Literature ( Raad voor de Nederlandse Taal en Letteren ) and the General Secretariat ( Algemeen Secretariaat ).