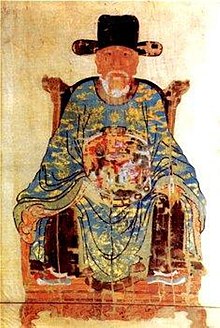 Nguyễn Trãi came from a noble family, he was born in Thăng Long as the son of Nguyễn Ứng Long and the daughter of the general Trần Nguyên Đán . When his father was captured by the Chinese, Nguyễn Trãi sought a way to drive the Chinese out of the country. He later became an adviser and close friend of Lê Lợi ( temple name Lê Thái Tổ ), who liberated Vietnam from the Chinese in 1428 and then ascended the throne himself and founded the Hậu Lê dynasty . Nguyễn Trãi played an important role in this victory. He is said to be the author of numerous political announcements by Lê Lợi and to have persuaded so many Vietnamese to support Lê Lợi's rebellion against the occupation by the rulers of the Ming dynasty. His most famous work is "The Declaration of Independence from China", Bình Ngô đại cáo .

After the war, Nguyen Trai received a high rank at the young court. But there was tension between him and other mandarins; many of you wanted to get him out of the way. The relationship between Nguyễn Trãi and the king Lê Lợi also deteriorated, which is why he withdrew from politics and returned to Con Son , where he occupied himself with his literary work.

His death marked the end of a political scandal in which the young King Lê Thái Tông was also involved. He was accused of being implicated in the murder of his king. The background was that in early 1442 Lê Thái Tông began an affair with Nguyen Thi Lo, a concubine of Nguyễn Trãi, when he was visiting the old scholar. A short time later, the king suddenly fell ill and died. His opponents took advantage of this event and accused him of murder. As a result, Nguyễn Trãi and his family were sentenced to death into the third generation .

Twenty years later, Nguyễn Trãi was officially rehabilitated by King Lê Thánh Tông because he had been innocent of the previous king's death.

Nguy warn Trãi was not only a great politician, military leader and national hero, but is also a famous figure in world history. He wrote many works of literature, history and geography, such as "Quốc âm thi tập," which is the first literary work to be written in Chữ nôm .

In one of his most famous essays, he recorded the Vietnamese strategy for the struggle for independence. Here it has been argued that military operations must be subordinate to the political and moral struggle. He said: "Better to conquer hearts than the citadels".

His ideology represented his time. Throughout his life, during the war as well as in the construction period, he showed his humanity, his patriotism and his love for the people in his poems and in literature .