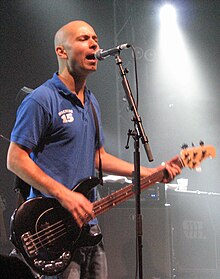 Nikola Sarcevic (born July 9, 1974 in Örebro ) is the singer and bassist of the Swedish punk band Millencolin . He also writes most of the band's songs.

At the beginning of 2004 he released an album under his own name for the first time with the singer-songwriter record Lock-Sport-Krock . It also includes the song Lovetrap , released as a single in Sweden . Sarcevic's style was based on musicians such as Simon & Garfunkel , the Beatles and Hank Williams . During the recordings he was supported by musician friends such as Mieszko Talarczyk from Nasum and Henke Wind from The Peepshows. Two years later he took a second foray as a solo artist with Roll Roll and Flee .