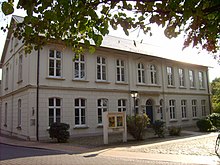 The Nordfriisk Instituut (German: Nordfriesisches Institut) is the central scientific institution for researching the North Frisian language, history and culture. It serves citizens, students and local history researchers as a central point of contact for Frisian language and cultural work. The institute is an affiliate of the European University of Flensburg . The office is located in Bredstedt . At the turn of the year 2015/2016, the institute had 14 employees (8.88 positions / 2.26 of them temporary).

The Nordfriisk Instituut was founded in 1965 by the North Frisian ethnic group . Initially located in a building on Bredstedter Osterstrasse, a larger home soon became necessary due to the growing tasks in connection with the increasing workforce. This was found from 1990 in the building of the former elementary school on Süderstrasse (house number 30).

The institute director was initially Tams Jörgensen. In 1987 Thomas Steensen took over the management, who was appointed director in 1992. The language director from 1988 to 1996 was Nils Århammar . On August 31, 2018, Steensen was retired after 31 years. He was followed by Christoph G. Schmidt.

To mark the 50th anniversary, an extension called Nordfriisk Futuur was inaugurated in 2015 . A multi-purpose hall has been set up on the ground floor, which is available for lectures, but also offers space for the permanent multimedia exhibition on the language region of North Frisia . In 2018, another permanent multimedia exhibition on the history and culture of North Friesland was realized. It can be visited during the institute's opening hours.

A magazine was set up in the basement to properly store a large part of the library and archive holdings. In this way, the space in the reference library, which had previously reached its capacity limit, was significantly relieved. Today it is used as a reading room.

The institute has set itself various priorities: the focus is on research into the North Frisian language and literature . These areas of education policy are part of education policy by law. The work of the institute relieves the Schleswig-Holstein state government by taking on the necessary research work by qualified personnel who are based in the region and are available to the public as contact persons.

With the integration of the emigration archive of the North Friesland district, the scientific work on North Frisian emigration takes on an area of ​​increasing importance.

The scientific work of the institute's staff is linked to the work of local researchers through various working groups. Membership is possible in the following working groups:

The institute maintains a reference library for employees and the interested public . The focus of the collection is on publications on all thematic areas of responsibility that institute members deal with. This includes above all writings related to local history and / or language. The languages spoken in the region range from Standard German to Low German and the North Frisian language , the latter being the focus of the collection to Sønderjysk .

The holdings recorded by the library also include the Jan-Tjittes-Piebenga Bibleteek . This is the largest collection of West Frisian literature outside of the Netherlands. There is also a (historical) map collection about North Friesland.

The library has a total of around 15,000 volumes. The number of new acquisitions each year is around 500 copies. The total inventory is supplemented by around 70,000 newspaper articles in the newspaper clippings collection that has been kept since the 1970s.

The archive keeps u. a. Estate documents of various North Frisian local researchers .

The emigrant archive documents the data of many thousands of North Frisian emigrants. At the same time, an employee of the institute works on a voluntary basis with the scientific analysis of the emigrant flows. Up until the opening of the Nordfriisk Futuur extension building , the sculpture Aufbruch in eine neue Welt (Departure into a New World) reminded of emigrated North Frisians. The commemoration was personalized by attaching brass plaques to the foot of the memorial after prior application by interested parties. These plaques were affixed to the rear of the building after the extension had been erected and the sculpture was staggered.

The North Frisian Institute Association is responsible for the institution. It is financed from membership fees, income from the work of the publishing house and from constitutionally secured subsidies from the state government of Schleswig-Holstein as well as scientific project funds from the federal government. The association was founded in 1948 and is therefore much older than the institute itself. The institute works politically independently, does not belong to either the German or the Danish side in the border region and is financially supported by both sides.

Since August 15, 2018, the institute has been headed by Christoph G. Schmidt.