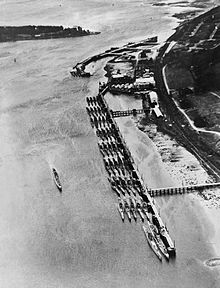 Submarines in June 1945 at the berth near Londonderry

The Operation Deadlight was a military operation of the British Royal Navy and the Polish Navy handed the sinking German submarines after the end of World War II in Europe.

After the unconditional surrender of the Wehrmacht ( VE-Day ), around 155 operational submarines of the Kriegsmarine were demunitioned by the end of 1945 and transferred to the Scottish ports of Loch Ryan and Loch Eriboll as well as Moville and to the port of Londonderry in Lisahally in Northern Ireland .

The sinking sites of the submarines are a popular destination for divers.