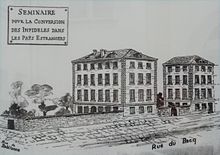 It was founded in 1658/63 by François Pallu and Pierre Lambert de la Motte in order to recruit and train clergy and lay people for the missionary work of Indochina . Since its inception, the fellowship has sent more than 4,500 missionaries to Asia. Today it still has 257 members (as of 2012).

The ancestral home of the Paris Missionary Seminary was built in 1663 on Rue du Bac , where it is still located today. A first chapel ( chapelle de la Sainte-Famille ) was replaced in 1683 by the architect Lambert with today's Chapelle St. François-Xavier . The seminary was renewed in 1736 , with the exception of the building at the back of the garden in which a room called the Salle des Martyrs commemorates the missionaries who died for their faith. It was closed after the outbreak of the French Revolution in 1792, sold in 1796 and refurbished in 1805.

Well-known Fathers of the Paris Mission were the India missionaries Jean Antoine Dubois (1766–1848) and Louis Savinien Dupuis (1806–1874), who founded the first indigenous order of sisters in India in 1844 in Pondicherry .

These lists are incomplete.