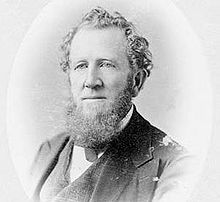 Peter Patterson (born April 10, 1825 in Londonderry , † 1904 ) was a businessman and politician in Ontario . He represented York West Borough in the Ontario Legislative Assembly from 1871 to 1883.

Peter Patterson was born in Londonderry, New Hampshire in 1825 and came to Canada West ( Province of Canada ) in 1849 . He and his brothers, who worked together as the Patterson Brothers, started a farming tool craft business in the Richmond Hill area . They also ran a blacksmithing tool shop , a sawmill , a watermill, and a foundry . The company built residential areas for its workers, a school, and a church near the manufacturing facilities. Peter Patterson served as Vogt in Vaughan Township from 1868 to 1873 and from 1871 to 1883 he was elected to the Ontario Parliament. In 1886 the company moved to Woodstock to be closer to the railway line and thus save transport costs. In 1891 it was taken over by Massey-Harris .