This article deals with the Phase5 company , not with the Ulli Meybohms HTML editor, also known by this name .

Phase5 was a German hardware manufacturer from Oberursel (Taunus) in the Hochtaunus district in Hesse , which brought out the first PowerPC -based CPU cards ( accelerator cards ) for the Amiga ( powerUP ) from 1995/96 . It was launched in 1997. In addition, corresponding upgrade cards for various Power Mac models were manufactured by Apple . Before that, the company had mainly become known for various expansion cards for Amiga computers, as one of the numerous providers at the time.

Initially, the company made a name for itself with various expansion cards for Amiga computers. These included graphics cards, SCSI cards and so-called turbo cards based on 68020-30 / 68040/68060 for the various Amiga computers.

Then the development of PowerPC -based CPU cards for the existing Amiga models was tackled. These were first officially launched in April 1997. According to unconfirmed information (Dietrich interview in a print magazine from 1999) phase 5 itself sold around 10,000 of these so-called powerUP boards.

Corresponding upgrade cards for various Power Mac models were later manufactured by Apple . These got in 1998 with prices around $ 800 and in sales u. a. by The Software Hut (USA) sometimes very good press.

After Amiga Inc. temporarily said goodbye to the PowerPC approach in May 1998 , the situation in the now divided PowerPC market for Amiga systems became more difficult.

Before the big breakthrough with announced own computers (A / Box with Caipirinha chipset, pre / box, AMIRAGE K2), the company went bankrupt in 2000.

On January 26th, 2000, an application for insolvency was filed for the assets of phase 5 digital products (the full company name) and the insolvency application procedure was opened by decision of the competent local court on the same day. On April 19, 2000, the insolvency application procedure phase 5 (No. 61 IN 18/00, Bad Homburg v. D. Höhe district court ) was discontinued due to lack of assets . The exclusive rights to the products that were still sold were already taken over in April 1999 by the hardware manufacturer DCE , which from then on provided repairs and services.

One of the ex-managing directors of phase5, Gerald Carda, later became chief developer (CTO) of bplan (MorphOS-News.de of December 3, 2002), the manufacturers of Genesi's Pegasos . 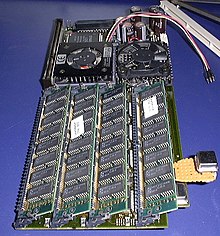 Cyberstorm PPC card for the A4000

The PowerPC-based CPU cards from phase5 made it possible for the first time to accelerate the models of the Amiga series beyond the maximum possible performance with the available 68k CPUs. The main feature of the cards was the dual CPU architecture. In addition to a 68040/68060 processor (68060: 50 or 66 MHz), there was also a PowerPC CPU (604e / 603e: 233/268 MHz) on the same plug-in card. They also offered useful features such as additional RAM slots and SCSI controllers for additional drives.

On the software side, powerUP initially followed a dual approach, in which the PowerPC side had to be controlled from the 68k side by a special runtime library (ppc.library). Because of the need for cache synchronization when exchanging data between the CPUs, programming was on the one hand time-consuming and the gain in performance achieved in standard applications was often low. Good acceleration values ​​resulted from skilful programming e.g. As with sealed codecs for graphics / animation formats (PNG, JPEG, GIF, MPEG) or compression libraries (libz), mostly in the form of suitably adapted AmigaOS - datatypes .

Around 1998, Phase5 presented a visionary project for a very powerful proprietary hardware platform (A / Box, Caipirinha chipset), some of which were software-based concepts in the MorphOS operating system of the Pegasos computer. In the meantime MorphOS is also available for PowerUP cards and the initial disadvantages of the dual architecture are avoided by means of the integrated PPC-side 68k emulation - similar to the Power Mac. The existing 68040/68060 CPU is simply deactivated after starting MorphOS.