Ploumanac'h is a small port on the north coast of Brittany , the so-called Côte de Granit Rose ( Breton Aod ar Vein Ruz ), the pink granite coast . The formerly independent place is now part of the municipality of Perros-Guirec ( Perroz-Gireg in Breton ). At the entrance to the port is the lighthouse built in 1945, and in front of the beach is the medieval oratory of St-Guirec . Above the beach is the St-Guirec chapel with a listed calvary .

Ploumanac'h has become one of the most visited resorts on the Granite Coast. The huge and unusually shaped granite colossi that stretch from the land to far out into the sea are worth seeing . 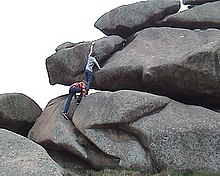 From Ploumanac'h to Perros-Guirec, the four-kilometer Sentier des Douaniers , the customs officer path, leads . Its name reveals that it was originally created to stop pirates and smugglers. In the early 19th century, customs officers patrolled here, because high protective tariffs and the continental blockade of Napoleon I made their business lucrative. Today the path is recommended as a great hiking trail through the bizarre rocks of the granite coast.

The granite mountains were formed about 300 million years ago. The magma mass did not penetrate all the way to the surface of the earth, so it only cooled slowly and formed a fine or coarser grain that gave the granite its name.