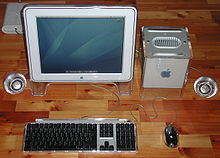 The Power Mac G4 Cube ( cube , English for cube ) is a PC model in the Power Mac series from Apple . The Cube was announced by Steve Jobs on July 19, 2000 at the MacWorldExpo in New York, hailed as a technical Olympus and only built for a short time. It was available between July 19, 2000 and July 2001 and was stopped indefinitely due to poor sales figures, but was never reintegrated into the product range. Apart from the power supply, the entire hardware of the computer was housed in a cuboid made of acrylic with an area of ​​approx.

The computer was designed in such a way that there was no need for an active fan (as in the very first Macintosh from 1984): There are ventilation openings in the housing at the top and bottom through which the heated air can escape (upwards) and cooler air is drawn in from below. Due to this construction, the only thing that can be heard from the cube during operation is mechanical noise from the hard disk , especially during the read / write process.

Were installed PowerPC G4 - processors PPC7400, PPC7410 later, with 450  MHz (standard version) or 500 MHz (optional). A slot-in DVD-ROM drive or, later, a CD-RW drive was available for optical drives . The maximum storage capacity ( RAM ) was 1.5 GB PC100 - SDRAM in three sockets . For wireless network operation, wireless LAN , there was a slot for an AirPort card. Modem , Fast Ethernet -Netzwerkanschluss (10- / 100-BaseT, RJ -45) and two USB -1.1- and FireWire -400 ports were also located on the motherboard. The standard equipment included 64 MB working memory (RAM), a 20 GB hard drive and an ATI Rage 128 Pro with 16 MB VRAM as a graphics card. For the 500 MHz model, an ATI Radeon card with 32 MB image memory was used. From February 2001 the Nvidia graphics card GeForce2 MX , also with 32 MB, was available as an order option for both models . The scope of delivery of the Cube also included: an ApplePro USB keyboard with a transparent one-button mouse and two small USB speaker balls from Harman Kardon that could be connected to the USB port on the Cube (or the screen). The pre-installed operating system was Mac OS 9.0.4 , in the revised version of the cube from spring 2001 Mac OS 9.1.

The cube was optionally sold with a 15-inch TFT studio display with a resolution of 1024 × 768 pixels.

At the time, Apple also developed a Gigabit Ethernet option (at least two copies of corresponding internal plug-in cards are known that replace the standard 100 Mbit / s plug-in card); due to the early sales stop, however, it was no longer widely used.

Apple designer Jonathan Ive won international awards for the design. The G4 Cube can be found in many publications on design and product design as well as exhibited in some technology museums. It is also one of the few computers on display in the New York Museum of Modern Art (MoMA).

Much criticism was made of the Cube because it could hardly be expanded internally. Compared to its bigger brother, the Power Mac G4, the cube lacks the four PCI expansion slots and the AGP graphics card had to be of a certain size in order to fit into the cube at all. All that remains is more RAM, a suitable graphics card , a larger internal hard drive (more than 128 GB only with OS-X driver) for the only internal 3.5 ″ hard drive slot and possibly another optical drive to expand the cube . Those who wanted to expand more had to rely on external devices connected to the USB or FireWire 400 connection. Further points of criticism were the approximately 10% higher price compared to the other G4 computers and the lack of a CD burner, which Apple only installed in a later revision.

For Apple, the Cube financially flopped. Because of its poor sales figures (148,000 according to Apple), it put a lasting strain on the value of Apple shares - only the iPod was able to end the crisis. Technologically, however, the Cube was a pioneer that paved the way for thermally demanding computer design.

On July 3, 2001, Apple announced that the Cube had been discontinued due to lack of sales success. The main reasons for the hesitant sales were the high price of the cube and possibly its poor expandability.

Apple finally stopped supporting the Cube on August 6, 2008, although previously only spare parts could be ordered for devices purchased in California.

The buyers of the Cube love (love) it because of its compact design and the quiet in the office thanks to the fanless design. Shortly after it was discontinued, the cube became a cult object, primarily due to its unusual design (the cube shape in a transparent Plexiglas housing), but also to its fanless concept. To make this possible, the warm air is transported away by convection . Therefore, the Cube has two openings: one on the back of the case, through which cold air can enter, and an opening on the top, through which warm air can exit. The effect is similar to that of a chimney ( chimney effect ).

Even today there are sworn fans of the Cube who upgrade their favorite computer to make them faster. Replacing the processor (up to 1.8 GHz possible in August 2005) and replacing the graphics card (the fanless Geforce 2 MX, which was also available in a cube version) are particularly popular. With the widespread use of solid-state drives , these are also often built into the cube, as there is no longer any operating noise. However, the faster processors usually require a fan, so that the fanless concept is undermined.

Because of its vertically installed slot-in drive , it was also called an Apple toaster (the ejected CD is reminiscent of toasted bread).

Another innovation was the so-called proximity switch , which can be translated as a “ proximity switch ”. Simply positioning the hand or a finger over an area of ​​the housing switches the cube on.