View over the plant 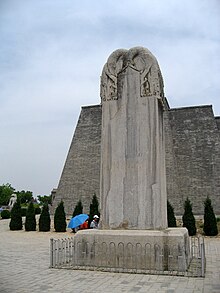 Stele without writing ( wuzibei ) in front of the Qianling mausoleum

The Qianling mausoleum ( 乾陵 , Qiánlíng ) or Qiangling mausoleum of the Tang Dynasty ( 唐乾陵 , Táng Qiánlíng ) is the tomb of the third Tang emperor Gaozong (ruled 650-683) and his wife, the later Empress Wu Zetian (r. 684–704), in Qian County, Shaanxi Province, China . The deceased were buried here in 684 and 706 respectively.

The grave complex is located on the slope of Liang Shan Mountain , six kilometers north of the county town of Qian , eighty kilometers northwest of the provincial capital Xi'an .

It is surrounded by large stone-carved human and animal figures and decorative stone pillars ( huabiao ) arranged in rows . The winged horses ( yima ), stone lions ( shishi ), the Shusheng tablet ( Shusheng jibei ) and the stele without writing ( wuzibei ) are famous testimonies to the art of stone carving of the Tang Age .

Side graves ( peizangmu ), including those of Princess Yongtai, have already been opened . A large number of wall paintings and clay figures have been found in them.

The Qianling Mausoleum ( Qianling ) has been on the list of monuments of the People's Republic of China (1-171) since 1961 .