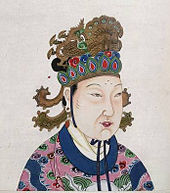 Wu Zetian's real name was unknown. After ascending to the throne , she changed her name to Wǔ Zhào ( 武 曌 , a character she had created especially for herself). Her posthumous name was Wǔ Hòu ( 武后 ).

Wu Zetian was born in Wenshui (present-day Shanxi Province ) at the end of the Sui Dynasty . Her father Wu Shiyue was a tofu maker who had become rich with timber trading under Emperor Yang . Because merchants had a low status in Imperial China, Wu joined the army of Li Yuan , then governor of the imperial family in Taiyuan and Shanxi. Li and Wu got to know and appreciate each other personally. Wu housed Li several times in his house when Li passed by on campaigns against peasant uprisings in the Wenshui region. In 617, on the advice of Wu, Li turned against Emperor Yang. Li promoted Wu to an officer in his army so that he was responsible for weapons and material. Li deposed Emperor Yang and Gong on the throne, and appointed himself Prime Minister. Wu Shiyue was appointed Deputy Minister of Rites and Count of Yiyuan. A year later, Li Yuan proclaimed himself Emperor Gaozu of the Tang Dynasty . Wu was promoted to general and was rewarded with numerous gifts for his services. In 620 he became Minister for State Buildings, where he managed to convince with ability.

Wu lost his wife and two of four sons during the wars. On the initiative of Gaozu, the 46-year-old Wu Shiyue married a 44-year-old distant relative of the emperor in 622. From this connection there were two daughters, the second of whom was Wu Zetian. Wu Zetian grew up in Yangzhou , where Wu Shiyue was transferred as administrator. Later they moved to Lizhou (province of Sichuan ), where Wu Shiyue served as governor. Wu Zetian was tutored in poetry, the Confucian classics , history and etiquette from her mother, who was a highly educated woman . Father Wu Shiyue died when Wu Zetian was eleven years old. According to Chinese tradition, the family moved to Wu Shiyue's birthplace, the sons inherited Wu Shiyue's entire fortune and should have looked after Wu Zetian and her mother. But they treated the two women badly.

The two women left Wenshui in 637 and moved to live with relatives in the capital, Chang'an . Wu Zetian was already considered a pretty young woman at that time - the ideal of beauty in the time of the Tang Dynasty dictated that women be overweight - and at the age of 13 she came to the palace of Emperor Gaozu as a low-ranking concubine . She was given the name Meiniang (媚娘) by the emperor and was given the task of recording the activities of the other concubines and reporting them to the emperor. Although Wu Zetian saw the emperor often, she did not become pregnant and did not receive a promotion for ten years.

Growing up, she became the concubine of the Crown Prince and subsequent Emperor Tang Gaozong . When Taizong died, she went to the monastery in 649/50, but Gaozong brought her back. Wu Zhao then allegedly suffocated her own daughter and blamed the main wife for the murder , so that Gaozong divorced her. After a few more intrigues, she became the main wife in 655. For her sake, the emperor moved the residence to Luoyang and also named her eldest son heir to the throne.

Gaozong suffered from dizziness and headaches from 660 onwards. It was believed that he was slowly poisoned by Wu Zhao until his death in 683. In a long struggle, the Empress removed her hostile ministers from the government and filled these posts with her confidants. She also apparently poisoned her eldest son in 675 because he took sides against his mother. Secured in this way as regent, she had her third son, Emperor Zhongzong († 710), resigned after only six weeks of reign and his younger brother Ruizong formally installed.

Wu Zhao first sought a new administration in 684. The constant expansion of the Tang Empire had created administrative disorder. The administrative weakness and the resulting false numbers of population, tax revenues, etc. promoted corruption. But she also had to wrestle for the continuation of her rule early on, which dwarfed her reform intentions.

In the middle of 684, Prince Li Jingye was planning a rebellion. Wu Zhao was accused of poisoning her mother, the death of her child and older brothers, and the murder of Emperor Gaozong. These revolts were limited to members of the Li clan and high-ranking officials in the central administration. They found no support from the population. Even so, Wu Zhao moved the capital to Luoyang in 684 , where their enemies were not as influential as in Chang-an . In addition, she promoted the official examinations as a countermeasure to the established nobility in the administration.

Wu Zhao's response was to form an Imperial Secret Police in 686 under Zhou Xing and Lai Junchen. This secret police quickly switched off all other state security organs and found their victims mostly among the senior literary officials and the noble families of the central administration, less in the provincial administration. Murder, torture, execution and exile were the result. Several princes (including the husband of Wu Zhao's favorite daughter) were also murdered. After a final persecution in 697, the secret police was broken up and Lai Junchen was sent into exile.

A novelty was a bronze urn with four slots in which the population could anonymously put their recommendations, complaints, demands and prophecies (and those who could not write were allowed to hire a letter writer at the expense of the state). Its contents have been carefully evaluated by a confidante of the Empress.

In 690 Wu Zhao ascended the dragon throne himself with the support of the Buddhists. Her former lover, the politically influential monk Yue Huaiyi, had "found" scrolls which claimed that the Maitreya (future Buddha) was a woman. More and more people were found who gave her the imperial throne even though she was a woman. After she formally resisted these petitions for a while, she acquired the title of emperor ( Huangdi ) and her son had to abdicate. In return, Buddhism was elevated to the state religion in 691 (in connection with an attack, she later changed her attitude towards the Buddhists and dropped the Maitreya title).

In the middle of 703, Wu Zhao became seriously ill and was confined to bed, the already troubled state administration stalled. A coup was launched by the family of ex-Empress Wei, Zhongzong's wife. The men from the palace guards made their way to Empress Wu Zhao, executed two of her ministers (the Zhang brothers) and forced them to abdicate in favor of Zhongzong. The Tang dynasty was re-established. Wu Zhao died of natural causes a few months later.

Emperor Zhongzong ruled until his own death in 710 - when his wife, Empress Wei, who was in distress because of her numerous affairs, poisoned him and put her son in office. The other surviving son of Wu Zhao, the ex-emperor Ruizong, might have tolerated it, but his son did not. Not wanting a second Wu Zhao, he broke into the palace, murdered Empress Wei and had her entire family killed. After the formal abdication of his father, Emperor Ruizong, he entered the government as Emperor Tang Xuanzong (ruled 713–756).

The portrayals of the empress, taken from chronicles, are generally to be viewed critically, especially since the Chinese chroniclers consistently denigrated women in influential positions because a ruling woman is incompatible with the basic principles of Confucianism . The other regent of China, the imperial widow Cixi , was also depicted in a disproportionately negative way.

Hunan Television began broadcasting the drama Empress of China on December 21, 2014, about the life of Wu Meiniang. The title role of the 96-part series was taken over by the Chinese actress Fan Bingbing .

In 2010, the director Tsui Hark in the movie Detective Dee and the secret of the phantom flames took the imperial court at the time of the Wu Zetian as a template for a film about the legendary judge Di ; As in the other parts of the film series, Wu Zetian is played by Carina Lau .