The title of this article is ambiguous. Further meanings are listed under Ramazzotti (disambiguation) . 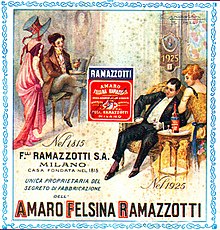 Ramazzotti is an Italian herbal liqueur , an Amaro , with an alcohol content of 30% vol. The trade name is Amaro Felsina Ramazzotti .

Amaro refers to Italian semi-bitter liqueurs that are made from a base alcohol with aromas , sugar or natural sweeteners . In contrast to the full bitters , their sugar content is higher.

The manufacturing method of Ramazzotti the same as 1815. The recipe contains 33 herbs and plants, including sweet and bitter orange peel , cinchona bark , angelica , Kaiser root, rose petals, vanilla and star anise . These are extracted and pulverized. Then sugar, alcohol and other ingredients are added. The resulting liquid is then filtered.

The Milanese pharmacist Ausano Ramazzotti in Milan used his experience in the wine - and liquor trade , 1815 own liqueur to develop. Sales were boosted, among other things, by the opening of the first coffee houses in the city center. In 1848 Ausano himself opened a bar near La Scala in Milan . After Ausano's death in 1866, his old laboratory business was given up in 1872 and production relocated to a new factory.

In 1985, the French Pernod Ricard group took over the Ramazzotti company. In 1989, distribution of the brand in Germany was transferred to Pernod Ricard Germany. In 1995 the production site was moved from Ramazzotti to the province of Asti . Since October 2000 there has also been a Ramazzotti Menta with a mint aroma and an alcohol content of 32% vol. On the German market .