Town hall of the Eckersdorf community in November 2018

The Eckersdorf town hall is a listed building in the municipality of Eckersdorf in the Upper Franconian district of Bayreuth . It is currently used by the local government.

The building, erected in the 19th century, has been used in many ways throughout its history.

Start of construction in 1830 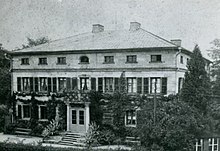 Town hall building around 1910, at that time the Bethanien orphanage

The builder of the sandstone building, erected around 1830, was the owner of the Fantaisie palace complex at the time , Duke Alexander . The building was initially given to Miss Karsten, the Duke's lover, as a gift.

On May 1, 1862, the St. Gilgenberg Asylum, a private sanatorium for men with nervous and mental disorders, was established in the building. The medical director was August Falco (1830–1905). At the end of 1880 there were 16 patients and 22 employees (3 doctors, 8 guards, gardeners, cooks, female servants).

In autumn 2018, the gravestone of August Falco and his family members was placed in front of the town hall and is now part of the listed property.

The sanatorium was not continued after the death of the founder. In 1908 the property became the property of a Mrs. Vollbrecht, who founded the Bethanien orphanage there. In 1913 the Nuremberg Martha Maria Association bought it and ran it as the Martha Maria Children's Home until 1938.

From 1938 the property was used as a vacation and refugee home. In 1945 the children's clinic of the Bayreuth Hospital was moved there. From August 1948, the house was used by Sisters of the United Methodist Church . Until 1949 evacuees and then so-called permanent guests were accepted.

In 1980 the Eckersdorf municipal administration moved into the building as the town hall.

Description of the monument

The Eckersdorf list excerpt from the Bavarian State Office for Monument Preservation describes the town hall as a two-and-a-half-storey sandstone square building with a flat hipped roof and a portal with columns altan , dated around 1830.