Europe-America 500 was realized in 1992 by the Russian Foundation for Social Invention and the Russian space company ZSKB-Progress as a goodwill and friendship project. The aim was the bilateral promotion of cultural and entrepreneurial activities, especially between Russia and the USA . At the same time, the project is considered a milestone in space history, as it enabled the commercialization of former military space technologies and thus ushered in the age of civil space travel.

The idea for "Europe-America 500" arose in connection with the 500th anniversary of the discovery of America by Christopher Columbus , the 35th anniversary of Sputnik and the 35th anniversary of the Treaty of Rome establishing the European Community . The initiator and project father was the former Russian aerospace engineer Alexander Baslow. Together with Gennadi Alferenko, the President of the Foundation for Social Invention, the planning and implementation of the project began in 1990, immediately after the fall of the Berlin Wall .

"Europe-America 500" was financed exclusively by private sponsors and companies.

Although “Europe-America 500” was implemented very successfully, it remained relatively unknown in Western Europe. Many experts and also media outlets initially suspected a “press duck” behind it and, due to its size and dimensions, viewed the project as unaffordable and unrealistic. Only after a successful rocket launch did extensive reports emerge worldwide. Among other things, in the evening news of German television stations such as ZDF .

The Austrian entrepreneur Santiago de Christos was co-organizer and the only Western European sponsor. He was invited to participate in early 1992 by Reiner Klett († February 14, 2006), former managing director of the space company Kayser-Threde (now OHB Systems AG ). Santiago de Christos not only participated as a sponsor, but also actively took on areas of public relations. Together with the then ambassador of the Russian Federation, Vladislav Petrovich Terechow, he organized an embassy reception in Bonn, which was attended by over 100 nations, as well as various press conferences. After completing the space project and as part of a UNICEF gala evening in the ballroom of the Bayerischer Hof in Munich, Santiago de Christos, together with Udo Jürgens , auctioned off numerous jewelry and valuables that were on board the space capsule. The proceeds went entirely to UNICEF.

The entrepreneur Bob Walsh was co-organizer and sponsor from the American side. He heard about “Europe-America 500” during a visit to Moscow at the end of 1991 and decided to support the project and make it known in the USA. Bob Walsh, together with US authorities, organized the transport of the space capsule to the port of Seattle after it landed in the Pacific. He also participated in the organization of an entrepreneur exchange program, which was connected to the space mission. 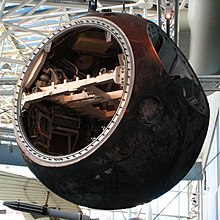 On November 16, 1992 at 0:52 a.m. MSK , a Soyuz rocket was launched from the Plesetsk spaceport in northwestern Russia. On board was an approx. 2.5 ton space capsule with the designation "Resurs 500". It comes from the same model and series that the Russian cosmonaut Juri Gagarin once used for his flight into space . During its 7-day journey, the Resurs 500 circled the earth at an altitude of approx. 1000 kilometers and at a speed of approx. 28,000 km / h. It landed in the Pacific on November 22nd at 10:32 a.m. PST , around 120 miles from Grays Harbor on the coast of Washington state. There she was picked up by the Russian warship Marshal Krylov and transported to the port of Seattle. The ship docked on November 24 at 9 a.m. at Pier 42 in the port of Seattle, where it was received by then Mayor Norm Rice and Washington State Secretary of State Ralph Munro. Inside the capsule were 19 orange-colored metal containers with cultural objects, works of art, jewelry, icons as well as messages of peace from the Dalai Lama and other heads of state. The space capsule can be viewed today at the Museum of Flight Aviation Museum at King County International Airport near Seattle.

The Europe-America 500 space project enabled important initiatives. Including a Russian-American entrepreneur exchange program led by the Europe America 500 Consortium (Russia) and the International Research and Exchanges Board (USA) to promote the development of small and medium-sized enterprises in Russia. The program was coordinated by the Russian Federal Labor Office and the United States Information Agency. During the program, over 10,000 young people from Russia took part in 4- to 6-week internships in the United States to develop business skills and gain experience. Many of them started their own businesses after returning to Russia.