The title of this article is ambiguous. For the Italian western rider see Marco Ricotta , for the 1963 film La ricotta see Der Weichkäse . 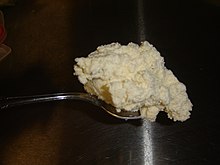 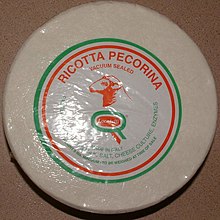 Ricotta ( Italian for 'cooked again') is a cream cheese made from sheep's and / or cow's milk , which is obtained by adding fresh milk / cream to the whey and precipitating it with acid (usually citric acid ) at 90 ° C. The cheese mass is removed by carefully skimming the surface of the liquid.

The sweet whey used to make ricotta is a leftover product from other cheeses; the whey no longer contains casein , but contains other proteins , mainly albumin . Fresh ricotta, which is made exclusively from sweet whey, has a mild, sweet taste and is almost fat-free. The greenish liquid (sour whey) that remains after the ricotta has been made can be used as animal feed or disposed of. The greenish color comes mainly from the riboflavin contained in milk .

The technical challenge in traditional production is to remove the heat-labile whey proteins from the serum . Simply heating is not sufficient, as the whey proteins would be denatured, but are still so finely distributed ("disperse") that they would be impossible to remove using conventional means used by cheese dairies . Now you use the help of the caseins, which you had removed by the cheese making, but which you add again by adding a certain volume of milk. By heating the milk-serum mixture to 90 ° C, the whey is also denatured.

The whey that is used to make other cheeses such as mozzarella or pecorino is heated to 70 to 80 ° C to make it thick. The warmth allows the albumin, a protein in whey, to coagulate in conjunction with the natural acid. The albumin includes the milk substances such as milk fat , minerals and vitamins dissolved in the whey . In a second step, the ricotta mixture is heated again; this will separate the liquid from the ricotta cheese. The resulting cream cheese is then skimmed off in baskets so that the remaining liquid can drain off.

A ricotta specialty is the Italian ricotta al forno . For this purpose, about 2 kg of ricotta are baked in a round baking pan in the oven to form a kind of heavy “ricotta cake” with a dark brown to black crust. After cooling, the cheese, which is now relatively compact due to evaporation and protein coagulation, can be removed from the mold and then cooled and protected from drying out for one to two weeks, refrigerated and vacuum-sealed for up to two months. The baked ricotta is white on the inside under the crust, which is also eaten according to taste, with a firm, but crumbly dough that is mild in taste with subtle roasted aromas. The cheese is suitable on its own or with some fresh vegetables or bread as a small meal or together with marinated fried vegetables as a starter. If he comes from Mammola in Calabria , he receives the PAT quality mark ( Prodotti Agroalimentari Tradizionali ) for 'traditional agricultural products'.