from Wikipedia, the free encyclopedia
This is the spotted version , flagged on April 22, 2020 . There are 2 pending changes that have yet to be viewed.

Kyūdō [ kjɯːdoː ] ( Japanese 弓 道 "way of the bow") is the art of Japanese archery practiced since the 16th century . What is particularly noticeable to outsiders is the slow movement, the impressive clothing traditionally used in ceremonies and the recognizable craftsmanship of the bamboo bow and arrows. 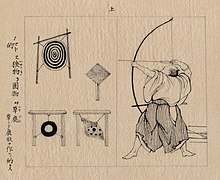 From the 4th to 9th centuries, the close contacts between China and Japan had a great influence on Japanese archery, especially the Confucian belief that archery reveals a person's true character. For hundreds of years archery has been influenced by Shintoism and Zen Buddhism along with the practical requirements of martial archery. The court nobility concentrated on ceremonial archery, while the warrior caste emphasized kyujutsu: the technique of martial arts with the bow in actual warfare.

In the 16th century and during the era of the Namban trade , the introduction of firearms gradually replaced the bow as a weapon of war in Japan as well. However, it has retained its importance as an instrument for hunting and sport, and in the present especially as a means of personal development.

Honda Toshizane (1836–1917), Kyudo lecturer at the Imperial University of Tokyo , coordinated elements of the martial and court styles into a hybrid style that ultimately became known as Honda Ryu (Honda School). This style had gained public recognition. After the Second World War , the many different schools were unified. Two predominant styles have emerged:

The technical differences can be explained by the previous use, i. H. whether the shooting was warlike on foot ( Bushakei ), on horseback ( Yabusame ) or ceremonial ( Reishakei ).

Kyūdō is often equated with Zen archery, which is not entirely correct: Kyūdō is archery and therefore not a pure meditation exercise , although in some Kyūdō styles the meditative aspect is of great importance. 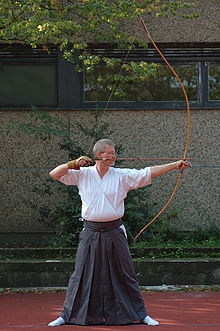 Kyūdō shooters in Hakama and Gi

In addition to the special exercise method, the bow differs noticeably from western sports bows. The Yumi is asymmetrically shaped, the upper limb is significantly longer than the lower.

The assumption that the lower limb has been shortened to make it easier to shoot from the horse is incorrect. The asymmetrical shape existed before horses were even introduced to Japan. Rather, it can be assumed that when making a bow from a thinner trunk, the irregularly thick wood had to be gripped below the middle in order to maintain the balance of the bow - heavier at the bottom, lighter at the top. This shape was later retained, although the composite construction method adopted from China has prevailed. One reason for the noticeable length is also the resilience of the material used (bamboo). In the asymmetrical design, the long upper arm enables the large extension, the shorter lower arm enables a higher arrow speed.

The bow has neither an aiming device nor an arrow rest. The arrow is placed on the outer right of the bow on the thumb, i.e. on the side of the bow facing away from the archer. The tendon is pulled with the help of a shooting glove with a pit on the thumb. In addition to the actual shooting, a number of ceremonial forms of movement are practiced in traditional clothing Hakama and Keiko-Gi , and advanced shooters also in kimono . An important part of the training is practicing the technique and the movement sequences before the Makiwara . A bundle of rice straw is shot at from a distance of only 2–3 m.

The arrow is shot horizontally at a bow strength between 7 and 26 kg (rarely more) at the target 28 m away, the Mato (diameter 36 cm). This distance and the arrangement of the center of the target almost 30 cm above the ground goes back to the medieval order of battle. The archers kneeled and tried from this height to hit the lower area of ​​the enemy, which was less protected by the armor. The movements are divided into eight sections ( Hassetsu ).

The asymmetrical shape of the bow and the fact that the arrow is on the right side would deflect the arrow to the top right when released. To compensate for this, the bow must be turned / screwed to the target within a fraction of a second when fired ( Tsunomi no hataraki ), before the arrow detaches from the string. In coordination with the movement of the left hand, the right hand must be turned inwards ( Hineri ) so that the glove releases the tendon. 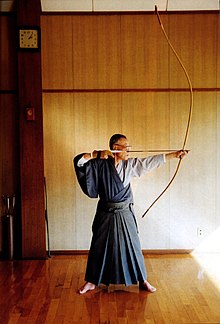 The type of shooting varies depending on the school and style. Heki-ryū, Ogasawara-ryū and Honda-ryū have established themselves as larger schools of recent times. While shomen (lifting the bow in the center) is predominantly used in Japan , in Germany and Europe it is mainly the Shamen style that is used, in which the bow is raised to the left. The main trend here is Heki-ryū Insai-ha, going back to the great influence of Genshiro Inagaki, who first visited Germany in 1969 on behalf of the "Zen Nihon Kyūdō Renmei". He was national coach of the German Kyūdō Federation until his death in 1995. The clubs in Germany based on his coaching work are affiliated to the International Kyūdō Association (IKyuF) via the German Kyūdō Federation and the European Kyūdō Association. The same applies to the German Kyūdō clubs that maintain the Shomen style.

Heki-Ryu Bishu Chikurin-Ha has been represented in the West for over thirty years. In 1980 Kanjuro Shibata XX, Sendai (1921–2013) began teaching in America and Europe. He founded 25 kyudojos. In 2011 he resigned as head of the school and installed his adopted son Shibata Kanjuro XXI, Sensei, as his successor. Shibata Kanjuro XX received the highest teaching degree certificate at the age of twenty. In 1959, after the death of Shibata Kanjuro XIX, he was officially appointed as his successor and the imperial bow maker. In 1994 his adoptive son, Kanjuro Shibata XXI, was officially awarded the title “Imperial Bow Builder” and he took over his father's bow making workshop in Kyoto. Now he is also the head of the Chikurin-Ha. The associations caring for the Chikurin-Ha are not members of the German Kyūdō Federation and do not have any Dan exams.

The publication of the philosopher Eugen Herrigel under the title Zen in the Art of Archery (1948) has done much to consider Kyūdō as a Zen art and to equate it with a religious activity. However, there have been misunderstandings here.

In the 17th and 18th centuries, the practice of kyūdō got a philosophical tendency: sayings like “one shot - one life” or “shooting should be like running water” were associated with the teaching of kyūdō. Here the opinions of the different schools diverged. Sometimes the hit was viewed as secondary and it was claimed that the correct mental attitude alone was sufficient when shooting.

In the Kyūdō, Munenmuso or Mushin (translatable as "empty spirit") should be achieved in full excerpt and when firing . However, this does not correspond to a general aimless indifference, but rather describes the state of such a highly condensed concentration that there is no room for other thoughts.

Good technique and form of movement are sufficient for the first quality. In the second, a purposeful dynamic is required. In the third, it is already certain that the arrow will hit before loosening. This quality can only be achieved when body, mind and technology merge into one.

The Japanese umbrella organization (ANKF) names the following values ​​as the highest good of Kyūdō:

In Germany, state championships are organized by the state associations in several federal states such as Bavaria, Hesse, North Rhine-Westphalia and Lower Saxony.

The German Kyudobund (DKyuB) organizes the national championships. Their implementation is regulated by the competition rules of the DKyuB. Kyudoka are eligible to participate from the 3rd Kyu, whereby the number of participants is limited for each federal state. The German championships are held in different performance groups.

At the team championships, a team with three shooters (plus one reserve shooter) can start for each national association.

The shooters with Kyu graduation determine their winner in the Kyu championship.

The individual championship is held for starters with grades from 1st to 4th Dan. As a preliminary round, this championship includes a style rating in which shooting technique is first assessed. Only the best rated 16 shooters compete against each other in a knockout system with hit rating.

The shooters with a graduation from 5th Dan and higher determine their winner in the Senpai championship.

In addition, a German duck championship (60 m distance) will be held outdoors.

All Kyudoka organized in the DKyuB who can safely shoot the Mato can take part in the Bundesliga competitions. A ranking list is determined in four rounds each year with 12 arrows per shooter.

In addition, the clubs organized in the DKyuB organize their own competitions. Participants in the European Championships in Germany are selected from a squad named by the DKyuB.