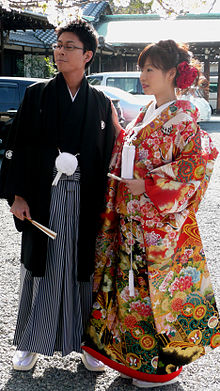 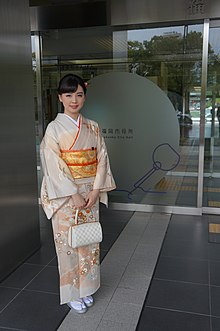 Kimono ( jap. 着 d, dt. "Anziehsache" from kiru = to wear and mono = thing) is a traditional Japanese caftan-like piece of clothing that is held together by a wide belt ( obi ).

Originally, the word kimono applied to all types of clothing.

Today's kimono took shape in the Heian period (794–1192). Since then, the basic shape of the kimono has remained largely unchanged for both men and women: a T-shaped, straight robe that reaches to the ankles, a collar and wide sleeves. If you stretch your arms out horizontally, the sleeves will fall from your wrist to about your hips (in some styles, the sleeves can even almost touch the floor). The robe is wrapped around the body, always with the left side over the right. The kimono is held together by a sash-like belt, the obi . It is tied at the back.

Over time there have been many variations in color, fabric and style, also in accessories such as the obi .

Today kimonos are preferred to be worn on special occasions, mostly by women. Men often wear kimonos at weddings and tea ceremonies . Kimonos are also worn for certain sports, such as kendo . There are a large number of kimono hobbyists in Japan who can take kimono- wearing lessons. Such lessons cover various topics: choosing fabrics and patterns that are appropriate for the season and the event, suitable underwear and accessories for the kimono, choosing and tying an obi , etc.

Most Japanese women would not be able to put on a kimono correctly without further help. The typical outfit for women usually includes twelve or more individual pieces, each of which must be put on in a specific way. (Men's kimonos are much simpler, usually there are no more than five pieces, as well as socks and sandals.) There are still professional kimono donners who can be hired to provide support, especially for special occasions. Members of this profession must acquire a license. They often work in hairdressing salons, but usually come to the customers' homes if requested.

There are still older women and, to a lesser extent, men who wear kimono every day. Professional sumo wrestlers must wear a kimono when performing in public outside the ring.

Nowadays the kimono is rarely worn in public, mainly by geishas . The kimono also includes getas (wooden sandals), jewelry and, in the case of short, d. H. waist-length, kimonos a hakama . Men may still find netsuke (wooden figurines), which served as a counterweight to the Inrō pocket substitute .

The kimonos for women are essentially one size. They are clamped and folded to suit the individual physique. Nowadays, however, both kimonos for men and women are increasingly available in different sizes. Very tall or heavily built people (such as sumo wrestlers ) need a specially tailored kimono.

In the past, kimonos were often completely taken apart so that they could be washed in pieces. Then the parts were sewn back together. Modern washing methods and fabrics have made this procedure largely superfluous. Sometimes a folded kimono is basted with wide, loose stitches for storage. This prevents wrinkles or wrinkles from appearing while holding the different layers of the kimono together.

There are styles of kimono for different occasions, from the very formal to the very casual. The degree of formality of a woman's kimono is determined by the pattern, fabric and color. Men's kimonos are generally cut in the same way and are usually worn in darker colors. The formality is mainly determined by the fabric and color, as well as by the number or lack of mon , family crests. Silk is the most desirable and formal fabric, while wool , linen, and cotton are more casual. Nowadays there are also kimonos made of polyester ; these are usually rather casual.

Kimonos are made from a single bale of fabric. These bales have fixed dimensions and all of the fabric is used to make the kimono. This is why larger cut kimonos are hard to find and very expensive to make.

Usually kimonos are expensive. High-quality kimonos are hand-sewn, and the fabrics used are also often handmade and lavishly decorated. A single women's kimono can easily cost more than € 10,000; Complete equipment - kimono, undergarments, obi , ribbons, socks, sandals and accessories - can cost over € 20,000. A single obi can be worth thousands of euros. In fact, most of the kimonos used by hobbyists or representatives of traditional art are far less expensive. Enterprise-minded people can easily tailor their kimono or undergarments themselves, as they follow a standard shape. Old kimonos can also be remodeled. Cheaper and machine-woven fabrics can be used instead of the hand-worked silk. Finally, there is also a flourishing trade in used kimonos in Japan . However, obi for women remain expensive. Even secondhand, they can cost hundreds of dollars and are difficult for the inexperienced to make. Men's obi are a lot cheaper, even those made of silk. This is primarily due to the fact that these obi are significantly narrower, shorter and significantly simpler than women's obi .

Kimonos are never wasted. Old kimonos are recycled in various ways: they are made into haoris or children's kimonos ; their fabric is used to mend similar kimonos; they are used to make kimono accessories such as handbags or covers, bags and housings for various utensils, e.g. B. Candy tongs (used in tea ceremonies ) or unique ceramic items. Men's kimonos that are damaged in the lower area can still be worn under the hakama so that the blemish is not visible.

There are several types of kimonos worn by women these days. They are selected according to age and occasion. In the following the different types of kimonos are listed in descending order of formality.

Note: Pattern is used here to mean ornamentation, motif (generally not regular / repeated ). Is only meant as a regular pattern if specified separately.

Since geisha are not ordinary Japanese housewives, they differ not only in their appearance on the face, but also, for example, in the wardrobe.

The hikizuri kimono is also often used in Kabuki to play the role of a young girl (e.g. Bandō Tamasaburō in Sagi Musume ).

Modern men's kimonos mainly differ in fabric and design. Most are muted, dark in color. Black and dark blue and green tones, sometimes brown, are common. Fabrics are usually matte. Some have a fine pattern; textured fabrics can be found on rather loose kimonos. Less formal kimonos can be a slightly lighter color, such as more delicate shades of purple, green, and blue. Some sumo wrestlers occasionally wear fairly light colors like magenta .

The most formal style of kimono for men is plain black with five kamons on the chest, shoulders and back. The kimono with three kamons is a little less formal . This is usually combined with white underwear and accessories.

Almost any kimono outfit can be made more formal by wearing hakama and haori .

Women's kimonos have an opening ( 身 八 つ 口 , miyatsukuchi / miyatsuguchi ) under the left and right armholes in the armpits , as well as a further opening ( 振 八 つ 口 , furiyatsuguchi or 振 り 口 , furikuchi ) below the sleeves . The name yatsuguchi ( 八 つ 口 ) comes from the fact that with these four additional openings, together with those for the arms, neck and lower body, a woman's kimono has "eight openings".

Kimono can be cut from a piece of fabric as follows (there are several cut variants, depending on the kimono):

This results in the following pieces:

Yukata
Informal summer kimono, usually made from cotton, linen, or hemp. Yukata are mainly worn at outdoor festivals by women and men of all ages.
Dancing / Dotera
Informal winter kimono that is padded with cotton.
Geta
Geta are wooden thong sandals that are worn with yukata by both men and women. A variant of the Geta is worn by the maiko ( geisha trainees) ( okobo ).
Hakama
A skirt or trouser skirt, more like a very loose pair of pants. Traditionally only worn by men, but now also by women. A hakama usually has folds and a koshiita - a stiff or padded area on the lower back. Hakama are also worn in various Budō arts , for example in Aikidō , Kendō , Kyūdō , Iaidō and Naginatadō . Again, the degree of formality is determined by the pattern. While very formal women's outfits do not include hakama , they are common for men.
Haori
Kimono covering in the manner of a jacket that goes up to hip or thigh height. It creates more formality. Haori were originally reserved for men only, but fashion changed at the end of the Meiji period . Today, haori are worn by both men and women, with women's jackets tending to be longer.
Haori-himo
A fringed, woven fastening cord for the Haori . The most formal color is white.
Obi
The Japanese equivalent of a sash or belt. Can be worn with a kimono or yukata . Obi are worn differently depending on the occasion. The versions for outfitting the female kimono wearer are the most complicated.
Tabi
Ankle-high socks with a separate toe area. Usually worn with sandals. Also available for boots.
Waraji
Straw sandals, which are preferred by monks .
Zori
Thong sandals traditionally made of leather, fabric or rice straw. Zori can be richly decorated with delicate embroidery - or not at all. They are worn by both men and women. The most formal men's zōri have an insole made of rice straw and toe straps made of white leather. In terms of design, they are similar to sandals . Women's zōri have a narrower and more oval shape than men's zōri .