The title of this article is ambiguous. For the English clergyman, Chancellor and Bishop of Winchester, see John Sandale .

The sandal (from Greek σάνδαλον sándalon or σανδάλιον sandálion ( diminutive ), " strap shoe "; original word origin not cleared ) is one of the oldest basic shoe forms , which is limited to a sole attached to the foot with straps . It is characterized by great airiness and (mostly) lightness. Sandals usually have no or at least no significant heel ; a feminine form of the sandal is the sandal , which is characterized by a higher heel. 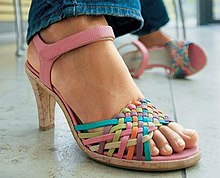 Women's sandal with a higher heel: the sandal

The sandal with no or very flat heels is basically a unisex shoe model. Narrower straps, sometimes decorated, can turn an original unisex model into a characteristic women's model.

Sandals show six different shaft variants that have their origins in different cultures or regions of the world. The Schrägriemensandale originally from sub-Saharan Africa , the Kreuzriemensandale from South America, the Zehenpflocksandale from India that Bäckersandale (largely closed shaft with slit-like openings) was developed in Europe and the Zehenring- or thong sandal (in the type of flip-flop plastic especially popular since the beginning of the 21st century) can be traced back to Egypt and Japan ( Geta , Zōri ). The cross- strap sandal (well-known example the gymnastics sandal) is also a basic form of sandals.

The bottom of a sandal is usually flat, but it can also be several centimeters thick ( platform sandal / sandal ; example: oriental cape ). In some African cultures, the level of the ground can be used to identify the social rank of the carrier. In the leather sandals of western cultures it is noticeable that they do not show any decorations in the leather of the bottom (and the straps), in contrast to the African, Central and South American and Indian sandals, which often have elaborate decorations. Almost all types of sandals have a worldwide distribution today. Japan, a country with a centuries-old sandal culture, has orientated itself strongly towards western civilizations since the middle of the 20th century, which pushed the culture of sandal wearing in Japan far back.

Sandals can be found in the drawings of the ancient Egyptians, for example in Tutankhamun's tomb. The ancient Greeks saw the lacing and untying of the leg straps of sandals as a symbol of eroticism. The goddess of love, Aphrodite , wore nothing but her right sandal when she encountered the Faun Pan . The Jewish mythology tells of Judith , of whose feet (in sandals) General Holofernes was so infatuated that Judith could cut off his head.

After the end of the Roman Empire , sandals lost their charm and were forgotten all over Europe. They were practically only to be found in ecclesiastical depictions of biblical people as exotic footwear from times long past. Only certain monastic orders made sandals compulsory, also as a symbol of seclusion from the world. It wasn't until around 1800 with the emergence of neoclassicism that sandals found feet again. The freedom symbols of France and the United States, Marianne and Columbia , wore sandals. The first fashionable sandals around 1790 were only vaguely reminiscent of their origin; they were flat and showed the ligaments but not the bare foot. This was covered by a second layer that resembled a sock. Exceptions were the Merveilleuses , fashionably progressive French women who at least showed their toes during the French Revolution . The sandals of the time were not intended for everyday use. A humorous newspaper article from 1807 reports on the finest sandals that were delivered by the shoemaker at 6 p.m., admired until 8 p.m., put on at 9 p.m., worn until bed - and broken the next morning.

Protestant ideals of a woman who had to be in the household and raise children no longer allowed sandals. Only in ballet did sandals gain a foothold, often constructed symmetrically, i.e. without a dedicated right and left foot. In the mid-19th century, male dancers also wore sandals on stage.

In addition to a basic classification according to the above-mentioned basic shapes, sandals can be designated according to various other criteria such as the place of manufacture (example: Wörishofener sandal ), the intended purpose (example: baker's sandal ) or based on certain properties (example: wooden sandal ). As a result, it is not always possible to give a clear or uniform description of individual sandal models. Well-known examples of this are Kneipp sandals and so-called Jesus slippers . The Kneipp sandal , also called Wörishofener sandal or simply course sandal , was manufactured and sold ten thousand times in Bad Wörishofen in connection with Sebastian Kneipp's Kneipp cures in various model variants as early as the end of the 19th century . The colloquial term Jesuslatschen (also called Roman sandals in the GDR ), which is sometimes used jokingly or mockingly , also does not designate a uniform sandal model, but rather stands for simple leather sandals with a flat bottom.

The sandal bottom is often used to categorize different sandals: 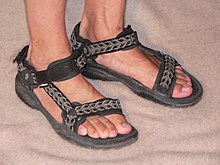 The latest sandal development dates back to 1982 (Mark Thatcher / USA): the sports sandal (also known as outdoor or trekking sandals ). Its characteristics are water resistance, a sophisticated strap system that can be closed with Velcro straps, a molded sole with a raised edge that protects the foot and a comparatively firm fit on the foot (which causes perspiration under the sole of the foot).

The side view of the Geta sandal reveals the simple construction

The construction method depends on the floor. In the case of a cross-strap sandal with a wooden base, for example, the cross-strap is either nailed to the side of the sole or passed through a slot in the sole. Leather sandals either have a glued base or are flexibly sewn (see design ). Goodyear welted sandals are rare and also contradict the flexibility and lightness of this shoe model. Flip-flops and modern trekking sandals made of plastic are injected into molds, whereby the shaft straps are anchored, or the straps are then pulled through openings. 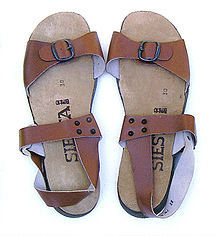 Although the sandal is one of the most popular shoe models in the world and has undoubted advantages in high ambient temperatures (comfort due to airiness), it has an ideological aftertaste in the western industrialized nations. Since sandals have historically been worn by marginalized groups or groups that wanted to distance themselves from the establishment since the 19th century , this shoe model often enjoys a dubious reputation, especially among men. This can also be seen in terms that are often disparagingly intended, such as Jesus' slippers for leather sandals, as they were and were worn by the hippies , the 68 generation, the blues scene in the GDR or activists of the anti-nuclear movement.

Putting on sandals without socks has long been considered the correct way to wear them, and wearing sandals with white socks has been viewed as stuffy. Meanwhile there are also other opinions.