The word Geta ( Japanese 下 駄 ) describes Japanese wooden sandals that are worn with traditional clothing such as the kimono . Typical for Geta are the high soles, which in earlier times served to keep the foot at a distance from the rubbish on the street.

A strap is attached to the wooden footbed ( 台 dai , literally: base, plateau ) in such a way that it holds the foot between the first and second toe up and from there to the right and left below. The footbed itself rests on a mostly two-part, also wooden sole (similar to the sole and heel in western footwear), which are referred to in Japanese as ha ( 歯 , teeth ). The high sole is intended to lift the wearer's feet from the ground and thus protect them from the mud and rubbish that used to cover the streets.

In the version with two crossbars as a stand, the shortness of the entire contact area enables a certain rolling movement of the foot including the shoe. The gap between the webs reduces the weight of the shoe, increases the grip against slipping in the direction of walking and enables form-fitting climbing in the longitudinal direction on a spherical stone, a transverse log or the edge of a step. 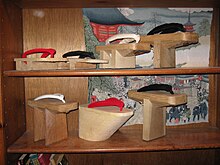 Nowadays, geta are most commonly worn on traditional occasions along with the yukata and sumo fighters. One of the characteristics of the shoe is that you usually hear it before you see it. The wooden footwear emits a typical clack with every step of the wearer. It is sometimes claimed that this is the sound that older Japanese miss most in modern life. On the other hand, it is the sound that every sumo fighter will miss the least, since wearing a Geta is only compulsory in the two lowest leagues . The geishas also wear these shoes in winter. Future geishas (" maikos ") wear different shoes, so-called okobo .

A Japanese proverb says: You don't know until you've worn Geta. This phrase is used to mean that you cannot know the outcome of a competition before it is over. Because wearing Geta makes a person appear taller due to the high soles, Geta wearing has a figurative meaning: It is used to express that something appears larger or more extensive than it really is on closer inspection.

Or: A fight is not over until you put on the Geta again . Since it is difficult to walk quickly and safely in Geta, and wood slips on many surfaces, in the feudal period of Japan, the Geta were taken off by two duelists before the fight and you fought in tabi or barefoot. Only when the fight was clearly decided did you have time to get back into the Geta.