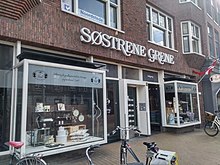 Søstrene Grene (translated: "The Sisters Grene", "Grene" is the family name of the founders and does not mean "green" or "branches", which is the name occasionally incorrectly translated) is a Danish retail chain that was founded in 1973 in Aarhus in Denmark by Inger Grene and Knud Cresten Vaupell Olsen was founded. The head office is in Aarhus and was relocated to Pakhusene in Aarhus Ø in April 2017 . Although the logo says “Søstrene Grenes Handelskompagnie”, the company is called Søstrene Grene.

Today, Mikkel Grene, the founder's son, is the company's CEO. His brother Cresten Grene works as a creative director.

Søstrene Grene's shops are designed like mazes and classical music is played in the background in all shops . The shops sell Scandinavian design, home accessories, kitchen accessories, gift items, stationery and small furniture , among other things .

The two characters Anna and Clara have been shown on the signs in the shops and in the company logo since the beginning of 1973. These are based on the personalities of Inger Grene's aunts. However, the sisters are not supposed to represent the founders of the company.

The first Søstrene-Grene store opened in 1973 on the first floor of Søndergade 11 in Aarhus. The chain was expanded to include stores in Aalborg and Herning in 1989 , and expansion continued through the 1990s and 2000s. In 2015, the company opened a store in Reykjavik , Iceland , and further stores in Stavanger , Norway and Malmö in Sweden followed in 2006.

The number of branches in the individual countries is (as of March 2018):