The Salto Ángel (after the rediscoverer Jimmie Angel , also Salto Churún-Merú) is a waterfall in southeastern Venezuela . With a height of 979 m, it is the highest free-falling waterfall on earth. In the language of the indigenous Pemón, it is called Kerepakupai Vena , which means roughly the place of the deepest jump .

The waterfall belonging to the Gran Sabana is part of the Canaima National Park . It is located in the western part of the Municipio Gran Sabana , in the Parroquia Ikabarú . Its water, the Río Churún , forms a tributary of the Río Carrao . It falls from a protrusion of the Auyan-Tepui , a table mountain with an area of ​​700 km². Halfway there, the water atomizes into a cloud of small water droplets, especially in the dry season; these gather at the foot of the rock face to form a raging river . Shortly afterwards the water plunges another 200 m. The waterfall is fed by often violent thunderstorms that fall on the large plateau of Table Mountain. The water plunges into the depths from holes in the rock 40 m below the edge.

Although the Venezuelan Ernesto Sánchez la Cruz discovered the waterfall in 1910, it was not known until 1933 after it was rediscovered by the American bush pilot Jimmie Angel (hence the name Angel Falls ).

In Panama in 1923, Jimmie Angel was persuaded by an alleged mining engineer to fly him up a certain mountain in the Venezuelan rainforest for $ 5,000 . He actually managed to land an airplane on the jagged plateau of a mountain. The two men dug a large amount of gold from a river within a few days. He was only able to let the aircraft take off again in a dive over the steep edge. From now on in search of gold, Jimmie Angel discovered the mighty waterfall when he was flying along the canyon of the Río Churún on November 16, 1933 . Two years later, when he dared to land on the high plateau with his wife and a scientist, his plane broke. Today this aircraft is on display in Ciudad Bolívar (Venezuela) in front of the airport. It took eleven days for the group to descend into the jungle over a steep step, which is now called the Second Wall . In the novel Icarus by Alberto Vázquez-Figueroa , the story of Jimmie Angel, the search for gold and diamonds and the discovery of the waterfall is described in detail.

The American photo reporter Ruth McCall Robertson (1905-1998) reached the foot of the waterfall on May 12, 1949, after an overland expedition initiated by her, and was the first to measure it. 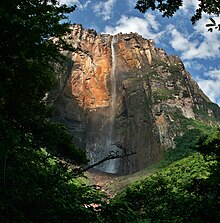 Salto Angel in the dry season

Although the Salto Angel can only be reached by a one-day boat tour from Canaima , it has developed into one of the biggest tourist attractions in Venezuela. Since the waterfall is located in the middle of the Venezuelan jungle, visitors are still dependent on the plane to reach the Canaima lagoon. During the dry season, the waterfall is less impressive and, due to the low water level on the Rio Churún, a branch of the Rio Carrao, can only be reached by dugout canoe to a limited extent . But the probability of being able to enjoy a view of the mountain and waterfall clear of clouds is much greater.

The then President of Venezuela, Hugo Chávez , decided on December 21, 2009 to give the Salto Ángel its original name, Kerepakupai Vena .

“How could we acknowledge the idea that the waterfall was discovered by a boy who came over from the United States? If we do that, then we're pretending that no one lived there. Nobody should talk about Salto Angel anymore. This is our waterfall and it was there before Angel ever flew over it. "

Carlos Dávila from the tourism department of the Venezuelan embassy in Berlin said the next day:

“Long before US pilot Jimmy Angel discovered the waterfall in 1937, Indians lived in the region. They had their own name for the waterfall, but it was almost lost. Today everyone calls him Angel after the American. You have to know that the waterfall and the table mountains are sacred to the Pemon Indians. So it could be a sign of respect to give it back the original name. So far it's just a suggestion, nothing is official. "