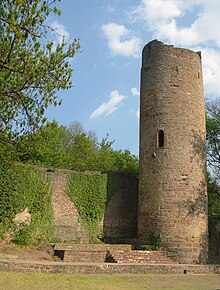 Keep of the Scherenburg ruins

The Scherenburg Festival on the castle ruins of Scherenburg in Gemünden am Main takes place as an open-air theater between mid-July and mid-August . The ensemble consists mostly of amateur actors and up to four professional actors . The 45-person theater ensemble had a record attendance in 2010 with 22,800 tickets sold. In 2016, 19,500 visitors saw one of the three performances.

In the years from 1909 to 1911 the first castle festival took place on the Scherenburg. After the termination, the restart of the Scherenburg Festival was continued in 1989.

The acquisition of a grandstand in 2002 and the purchase of a tent roof over the grandstand to protect against rain and sun in 2004 should attract more visitors, which was also successful.

After 15 years, Horst Gurski gave up the artistic direction after the 2015 season. His successor was Peter Cahn , who will take over as artistic director for the first time in summer 2016.