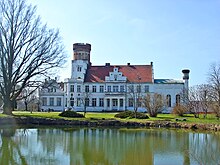 Wrodow Castle with a pond

Wrodow Castle goes back to the Wrodow estate, which was mentioned in the 16th century. It is located in the district of Mölln , in the Wrodow district ( Mecklenburg Lake District in Mecklenburg-Western Pomerania ), 15 km west of Neubrandenburg . Today the castle houses, among other things, changing art exhibitions.

Since 1817 the estate has been owned by the Neumann family. Ludwig Neumann junior, to whom the estate was transferred from his father in 1860, had the manor house expanded like a castle. Until the end of the Second World War, the castle was inhabited by the widow of the last heir. In 1943, a Rostock high school moved into the castle for almost two years with 80 girls and the teachers after the school building in Rostock was destroyed in a bomb attack. In the years between 1945 and 1990 the castle was not used as a refugee home or consumption. Thanks to the commitment of the population, however, a complete decline could be prevented.