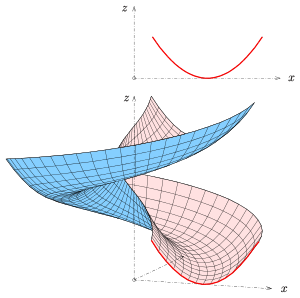 Other profiles (parabola, trapezoid, ...) are also important for technical applications. 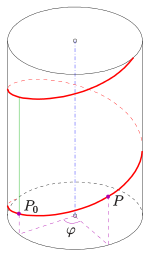 Screw connection of a point

The screwing of a point can be imagined as a superposition of a rotation and a shift in the direction of the axis of rotation proportional to the angle of rotation.

describe. Here, the screw parameters , the angle , measured in radians, the helix angle and the pitch (green). The path of the point is a helix (red). It lies on a straight cylinder, the radius of which is equal to the distance between the point and the screw axis.

If is, the resulting helix is ​​called right-handed, otherwise left-handed . (For would result in a rotation around the z-axis).

The screwing of the curve

supplies the screw surface with the parameter representation 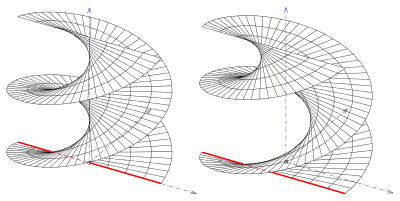 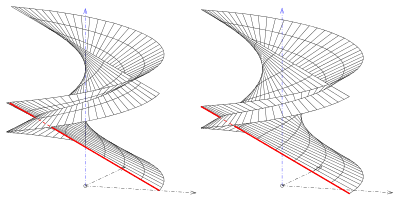 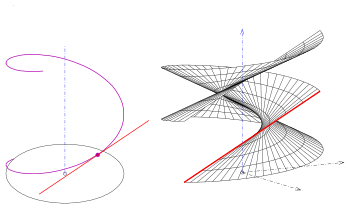 If the given curve is a straight line, a standard screw surface is created. There are 4 cases to be distinguished:

Inclined standard screw surfaces penetrate one another (see picture), straight ones (helical surfaces) do not.

An interesting special case of the inclined open standard screw surfaces is when the screwed straight line has the distance from the screw axis and the angle of inclination with respect to the xy plane . In this case the area can be understood as a torse . It is the tangent surface of the helix (guide curve) , i.e. That is, it is the union of all tangents of the helix. As Torse this Regelschraubfläche is unwound . 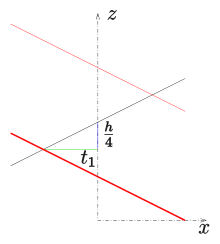 This is an infinite number of helical lines. The smaller is, the further apart the double curves are.

About the screw gate

If you go from the helix

off, the corresponding screw gate has the parameter representation:

For the surface normal results 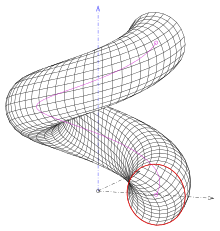 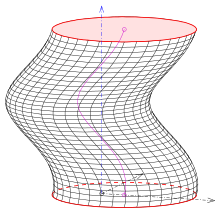 There are 3 interesting types of circular screw surfaces: