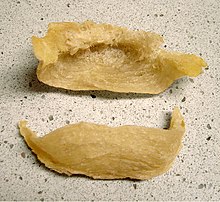 A bowl of swallow's nest soup 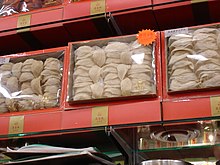 Swallow's nest soup ( Chinese  燕窩  /  燕窝 , pinyin yànwō , Jyutping jin 3 wo 1  - "swallow's nest") is an expensive dish in Chinese cuisine . It owes its price less to its taste than to its elaborate preparation and the invigorating medicinal properties that traditional Chinese medicine is said to have given it.

The so-called in German "swallows' nests" is actually about the nests of swiftlets , like the swifts to the sailors are. They mainly consist of protein-rich , tough saliva , the nest cement, which forms a light, translucent and gelatinous mass. The particularly sought-after “white” swallow nests come from the white nestsalangans ( Aerodramus fuciphagus ) which are widespread in almost all of Southeast Asia . The nests of the black nest salangans ( Aerodramus maximus ) are called "black" because of the dark feathers worked into the nest cement.

In China - with the possible exception of Hainan - there are none of the types of sailors that produce nests that can be used as food, so that imports are mainly from Thailand , Indonesia , Malaysia and India . Collecting the nests in caves on rocky coasts is a difficult undertaking. Sometimes whole groups of collectors climb stakes or ladders up to 90 meters to get to the nests. In large caves, professional collectors climb with ropes and lanterns.

To prepare swallow's nest soup, the nests (one to two per serving), swollen in water and thoroughly cleaned, are cooked with veal in chicken broth, where they dissolve and give the soup a slightly gelatinous bond. Their taste is rather mild.

Monopoly in the 18th century

An 18th-century Chinese entrepreneur in Siam got rich by getting a monopoly on swallow nests from the king . When he became aware of its value, he withdrew the license again.

On January 13, 1765, after the wedding mass of Emperor Joseph II. With the Bavarian Princess Maria Josepha Antonia, an open table was held in the Munich Residenz , “where a soup made from Indian bird (swallow) nests is a rarity in Europe, It was served up, which cost 6000 guilders, of which half and whole masses were given from the court kitchen to court and state officials, then to dignitaries and citizens of Munich in order to try such precious soup, hence still in Bavaria the talk is. "( Felix Joseph Lipowsky )