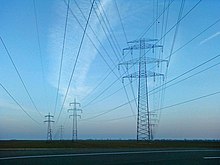 Overhead lines are often used for the supply of electricity

Secondary energy is energy in an energy transformed from the primary energy into another form. In the energy industry, it is generated or refined through energy conversion or refining in order to be able to transport or use the energy more easily. Examples are coke , briquettes , coke oven gas , petroleum products such as gasoline , district heating and electrical energy generated in thermal power plants .

Thermal power plants can be operated with geothermal energy , nuclear energy , solar energy or fossil fuels. Traditionally, part of the energy is usually converted into electricity. In all of these conversion processes , part of the primary energy is lost as waste heat and is no longer available as useful energy. With the cogeneration is an attempt to reduce these losses by secondary energy for heating buildings adjacent residential areas or for greenhouses is used.

Electric power can be generated in hydropower plants , photovoltaic or wind power plants. The advantage of electricity lies in the long-range, inexpensive transport, provided that an appropriate infrastructure in the form of a power grid is available. In contrast, a district heating network only makes sense in densely populated areas. The economic reasons also result from a definition by the Federal Court of Justice :

"If from a not owned by the building owner heating system by a third party according to company economic point of independently produced heat and other delivered , it is district heating."