A sequence diagram usually represents a path through a decision tree within a system flow. If overviews with all decision options are to be developed, an independent sequence diagram would have to be modeled for each possible process; therefore the activity diagram or state diagram is more suitable for this .

Notation of lifelines and messages

Example of a sequence diagram

The figure on the left shows an example of a sequence diagram with a header and a content area. In the case of a sequence diagram, the keyword in the header is sdor interaction. A lifeline (dashed) goes out from each communication partner. Two synchronous operation calls are shown , recognizable by the arrows with a filled arrowhead.

The figure on the left shows four further notation variants for lost and found messages , as well as for messages from and to a connection point . You can tell that it is a message from or to a connection point by the fact that the corresponding arrow starts or ends on the edge of the sequence diagram. The connection point is simply the intersection of the arrow with the edge, a clearer graphic symbol is not provided for this.

A sequence diagram describes the behavior of a system by specifying the chronological order of event occurrences . It is not the precise point in time when an event occurs that is decisive, but rather which events must occur before and which after a certain occurrence of the event (see sequencing and concurrency ). 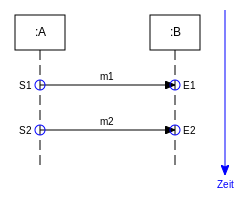 The figure on the left shows a sequence diagram with two synchronous operation calls. The four event appearances are circled in blue. S1and E1stand for the send and receive message events for the message m1, S2and E2for the corresponding events that are associated with m2. The time axis runs from top to bottom in a sequence diagram, but should not be understood as absolute time.

The following statements can be made about the occurrences of events in this sequence diagram:

All in all modeled this sequence diagram therefore an interaction that is specified by exactly a sequence of event appearances: <S1, E1, S2, E2>.

Sequence diagram with two asynchronous operation calls, the sequence of event occurrences E1 and E2 is not restricted

The sequence diagram in the figure on the left differs only slightly from the previous sequence diagram. The only difference is that instead of two synchronous messages , two asynchronous messages are shown. Here still applies that E1to S1and E2after S2occurs because the reception always occurs after the send message event. Because this is asynchronous communication, it could E1not only occur before, but also after S2or E2. 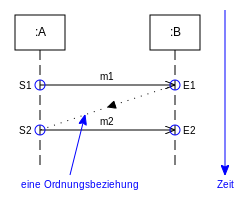 With this additional limitation is this sequence diagram again an interaction with exactly one acceptable result is: <S1, E1, S2, E2>.

Interactions can become very complex, depending on the system being modeled. If there was no way to modularize sequence diagrams, the corresponding graphical representations would be confusing and difficult to understand.