The Seven Dirty Words ("seven dirty words") are seven English-language words that the American comedian George Carlin first performed in his monologue Seven Words You Can Never Say on Television in 1972 . Those words are shit , piss , fuck , cunt , cocksucker , motherfucker, and tits .

Until 1972, these words were considered unsuitable for radio and television broadcasts in the United States and were avoided or, if used in rare cases, censored. Carlin's list was not based on official statistics, but was compiled by himself. 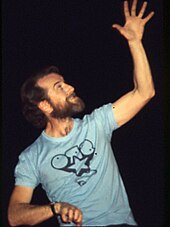 The comedian George Carlin was the author of a monologue titled Filthy Words ( Dirty words ). This was broadcast by the US radio station WBAI on October 30, 1973. A complaint with the Federal Communications Commission (FCC) resulted in a ban by the Supreme Court in 1978 . In the United States, "dirty" words were subject to severe restrictions until a 2010 New York appeals court ruling found the ban unconstitutional.

The original combination of the words was shit (' shit '), piss ("piss" or " piss "), fuck (" fuck "), cunt (" cunt "), cocksucker ("cock sucker "), motherfucker ("motherfucker") and tits (" tits "). Since all of these words (apart from the two compound words that contain cock and fuck ) contain exactly four letters, they are also called four-letter words , along with other vulgar four-letter words .

Carlin repeatedly made fun of these and similar decisions in the years following the 1978 ban; so he read z. For example, at the end of his live special, Carlin at Carnegie Hall (1982), he presented a revised version of his Filthy Words , a very long list of other - in American parlance, offensive words. Carlin did not live to see the 2010 ruling that lifted the ban; he died in 2008.

The band Anthrax released the track Startin 'up a Posse on the 1991 compilation Attack of the Killer B’s , the refrain of which is shit, fuck, Satan , death, sex, drugs, rape / these seven words you are trying to take and the censorship and the related restriction of freedom of expression is on the subject.

The song Family Reunion by blink-182 consists almost entirely of these words and was therefore only played live in the United States; only the European releases contain this song.

The single "7 Words" from the album "Adrenaline" contributed significantly to the further great success of the American band Deftones. The seven dirty words were also the basis for the hardstyle song City Bitch by Nitrouz.