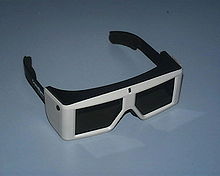 A shutter 3D system requires shutter glasses (also LCD shutter glasses ) to see 3D images . These special glasses have lenses that consist of two liquid crystal surfaces (one for the left and one for the right eye) that can be electronically switched between transparent and opaque. This can be used to either darken the left or right eye. For this purpose, the left and right image is displayed alternately on a monitor , a television set or on a screen . The glasses only let the appropriate image through to the corresponding eye. This enables stereoscopic viewing , for example for the playback of 3D films .

The operating principle of the shutter system goes back to the American engineer and inventor Laurens Hammond (1895–1973, better known for the electromagnetic organ named after him ), who in 1922 patented an electromechanical prototype "Teleview" for the first time.

Today's "electro-stereoscopic" LCD shutter glasses system was patented by Lenny Lipton in 1985 and initially marketed in the commercial sector (medical technology) by his company "StereoGraphics" under the name "CrystalEyes". In the cinema, the same system works as a "RealD" 3D projection with the "ZScreen" addition in front of DLP projectors.

In the 1990s, 3D shutter glasses were offered in a package with graphics cards , a well-known example being "ELSA". On German television, the procedure was used once on a test basis in the (long-discontinued) BR program ComputerTreff . A video was recorded with two television cameras in the studio. One field was then used for the left eye and the other field for the right eye via an image mixer. In order for the viewer to be able to view the two images synchronously again at home, he needed a simple circuit with a photocell, which carried out the synchronous switching of the shutter glasses. A white spot was faded into one field, the other field had a black spot. Without glasses, this area then flickered accordingly. A kit was also available in stores with glasses. A few dozen viewers took part in this experiment back in the 1980s. With a normal picture tube television set, this method only achieves 25 frames per second (25 Hz) per eye, and the result is a flickering picture. Modern 3D shutter glasses also have a larger LC window - the first glasses only showed a very limited image section.

With this method, both images are projected one after the other onto the white screen. For a film with 24 frames per second, 48 images have to be brought onto the screen in the same time, which is no problem for modern projectors. In order to avoid flicker, higher frequencies are usually chosen, with each individual image then being shown several times. The advantages are the high color fidelity and the usability of a normal screen as well as the independence from the head tilt of the viewer. In addition, despite the higher costs for the shutter glasses, such a system is more cost-effective up to a certain audience size, since, in contrast to the polarization method, neither a second projector nor a polarizing filter for the projectors nor a metalized screen are required and the synchronization effort is eliminated.

With the 3D-ready home theater projector (mostly DLP projector), the HDMI 1.3 connection i. d. Usually a 120 Hz 3D video signal is supplied from a 3D-compatible PC graphics card and projected sequentially as 2x60 Hz 3D video. In addition to suitable 3D shutter glasses (e.g. Nvidia 3D-Vision with its own USB infrared transmitter), inexpensive so-called "DLP-Link" shutter glasses can be used. Only 3D projectors with an HDMI 1.4a connection can be fed directly with 3D HD signals from 3D Blu-ray players or HDTV receivers.

Flat screens that work with a frequency of 60 Hz are not suitable for combination with shutter glasses. For shutter glasses, a monitor frequency of 100 Hz is regarded as the minimum, since the process effectively halves the frequency, so each eye is only shown 50 images per second. This is strongly flickering with static images, especially texts, but this is no longer noticeable with moving images such as games or videos. In both cases, however, the eyes become tired within a short time: the lower the frequency, the more stress is put on the eyes. Therefore, a frequency of 120 to 160 Hz is usually recommended, depending on the hardware and screen resolution available. This corresponds to 60 to almost eye-friendly 80 Hz per eye. Tube screens reach 120–160 Hz, but they always glow somewhat, which is noticeable at high frequencies in stronger streaks, which in turn cloud the picture quality. Photoluminescent tube monitors could be used together with LCD shutter glasses for 3D pictures and videos or PC games before suitable flat screens were available.

Current 3D flat screens and DLP projectors for 3DTV (3D-HDTV and 3D-Ready) work with 120 Hz or 96 Hz frame rate and short pixel holding times, which results in a 60 Hz frame rate per eye for the synchronously switched LCD shutter glasses.

Since the lenses of most LC shutter glasses are polarized, they only work on TFT monitors if the polarization direction corresponds to that of the TFT monitor. If this is not the case, the glasses must be rotated 90 °. Furthermore, in connection with a TFT or plasma monitor, shutter glasses require a slightly different timing than on a tube monitor so that they work properly. The problem of “ghost images” (i.e. optical crosstalk from the left to the right image channel, etc.) arises above all when the response time of the monitor is greater than 10 ms. However, this is hardly the case with modern 3D monitors and projectors. The shortest response time, i.e. H. DLP projectors and TV sets offer almost no "ghosting".

An infrared transmitter on the monitor or projector or next to the cinema screen emits the synchronous signals with infrared synchronization . Since the shutters require relatively little power, the glasses and the IR receiver can be powered by a button cell.

A synchronization process using Bluetooth radio technology was introduced by various manufacturers in 2011 and has been adopted into a cross-device standard for shutter glasses control, as previous infrared systems were often not compatible with one another.

One of the synchronization methods is the "DLP-Link" white pulse method. A white flash is projected between the individual images, but cannot be perceived by the compatible DLP-Link glasses. DLP-Link shutter glasses can synchronize with the projector. With the 3D shutter technology in connection with DLP projectors, ghost images (with good synchronization) almost no longer occur. In contrast to solutions that require an IR emitter, DLP-Link has the advantage that it is synchronized directly with the canvas image and not via the playback device. Disadvantage: Some glasses, however, have perception disorders of the white flash in very bright scenes and therefore start to flicker. This can be remedied by reducing the brightness of the display device. There are also very cheap shutter glasses from the Far East that do not suppress the white flash and therefore cannot display real black.