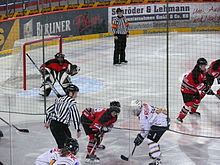 After a pioneering phase in the 1980s, its popularity was largely limited to North America , so that it was recently threatened with being removed from the Olympic program.

In the USA, the annual salaries for national players are $ 68,000 (compared to $ 2.4 million for men), in the NWHL they are significantly lower and have even been cut in half due to losses.

Men and women at the game in Engelberg, Switzerland, 1914

Misogynist caricature in the Nazi era, 1941

Even in the early days of the sport, ice hockey was also practiced by women. In Canada, a first championship game between Montreal and Trois-Rivieres was played in 1902. In 1911 there were competitions between women's ice hockey teams in Berlin. In Europe, the Scandinavian countries of Sweden , Finland , Norway and Denmark first developed an independent league operation for women.

In 1923, “Die Woche” reported: Ice hockey players compete in a 100-meter race with a soccer ball, which they drive to the goal with the help of their long ice hockey stick. The title page of Fliegende Blätter No. 4407 from 1930 is dedicated to women's ice hockey.

In 1930, at the International Ice Hockey Congress in Chamonix, a decision on the introduction of women's ice hockey or competitions for women's teams was postponed during the ice hockey world championship .

During the Nazi era, numerous sports were considered unsuitable for women, including, for example, gymnastics, rowing and “ice hockey as a women's sport”.

Similar to women's football, reservations persisted until the late 1970s; the Spiegel 1970s report from Sweden about ice hockey games by women . A popular scientific publication from the GDR from 1974 on women justified a rejection with “lower performance”.

In the 1980s, women's ice hockey established itself in the Federal Republic of Germany , the Netherlands , Great Britain , Czechoslovakia and later also in the People's Republic of China and Japan . In Switzerland there has also been a regular championship operation since the 1980s, and since 1994 it has been divided into three leagues.

Of the European teams, Finland managed to come third in ten out of 14 world championships. As in some other team sports, women from the People's Republic of China also manage to play a bigger role than men in ice hockey. The Chinese women are currently (2012) in 13th place in the IIHF world rankings , while the men are just 38th.

An important women's ice hockey tournament for national teams is the Nations Cup , which was founded in 2003 as the Air Canada Cup and has been held in Germany ever since.

For European club teams, the IIHF European Women Champions Cup existed between 2004 and 2015 , the European Cup of National Champions, the record winner of which is AIK Stockholm and Tornado Moskowskaja Oblast with four successes each .

Only a few countries have regular games for junior women's ice hockey teams. Here, too, the North American countries play a special role. There are regular youth leagues in Canada and the USA, while in Sweden, for example, tournaments are primarily held by regional teams. In 2007, the International Ice Hockey Federation organized an invitation tournament, especially for European U18 women's teams, which was considered a qualifying tournament for the introduction of the U18 World Cup in 2008 . As expected, the North Americans dominated here: the USA became the first world champions, followed by Canada, while third place was surprisingly taken by the Czech Republic.

In Germany, according to the implementation regulations for the 2006/07 season, players may be used in boys' games in the same age group or an age group lower.

The first professional ice hockey player was Manon Rhéaume , who was the first woman on an NHL team in 1992 . The goalkeeper was only used in a preparatory game for the Tampa Bay Lightning .

Unlike in the USA, no woman has been under contract in the top division of men. Maren Valenti , whose brother and nephew also play ice hockey, was allowed on the ice as a striker for 53 seconds in a DEL game at the Eisbären Berlin in 1998. This was followed by a contract with Wölfen Freiburg in the 2nd Bundesliga, also men. Maren Valenti was also the youngest player of all time to be nominated for the first Women's A World Championship in 1990 (Ottawa / CAN) as a 13-year-old.

In addition, Hayley Wickenheiser has achieved worldwide fame. Viona Harrer is the first German goalkeeper to prevail at a male professional club, namely the Tölzer Löwen .

In general, the rules in women's ice hockey are the same as in men's ice hockey. Nevertheless, there have been restrictions since 1990: women are not allowed to choose the shape of the visor freely, but must wear full face protection. Body checks are forbidden to them at international tournaments, which leads to a lot of stick blows and hooks. These restrictions are considered out of date and are repeatedly criticized.