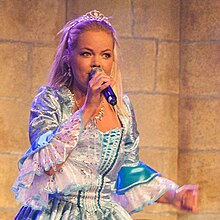 Sita started her career in 2001 in the talent show Starmaker from which the band K-Otic emerged. After various successes, Sita left the band and released her first own single Happy , with which she also hit the charts, and shortly afterwards her debut album of the same name.

A little later she released the songs Hello and Selfish , but did not achieve the same success as before with the debut album.

In addition, Sita contributed the song Lopen Op Het Water to the marriage of Crown Prince Willem-Alexander with the Argentinian Maxima in a duet with the singer Marco Borsato in 2002 and was also able to record chart successes with this.