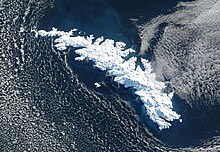 The South Georgia Survey (loosely translated: surveying South Georgia ) was a British research campaign carried out from 1951 to 1957 for the geodetic surveying and mapping of South Georgia . Its leader was the polar explorer Verner Duncan Carse (1913-2004). Between four and eight scientists were involved in each of the company's four sub-campaigns.

Although South Georgia had served as a commercial whaling site since the beginning of the 20th century , the interior of the island was largely unknown. Maps that existed at that time were based on measurements of the coastline by the British navigator James Cook , who landed here in 1775. The task of the South Georgia Survey was to survey the entire island and use these surveys to create high quality maps of the area.

The company was financed by the Royal Geographical Society , the Falkland Islands Dependencies , the Odham Press publishing house and other private donors. The War Office and the Ministry of Supply provided supplies and equipment. The scientists' journey to and from South Georgia took place on transport ships that supplied the whaling stations on South Georgia. The whaling station in Grytviken served as a research base . Scouting trips on site were carried out on whaling ships. Numerous geographic objects on South Georgia were discovered and named in the course of the research.