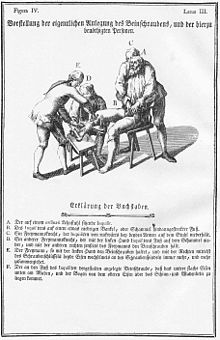 Applying a leg screw. Illustration from the Constitutio Criminalis Theresiana

A Spanish boot , screw boot or leg screw is a late medieval - early modern torture instrument that was used in the embarrassing questioning . It was used to extort confessions and thus belonged to the common means of so-called truth-finding.

The leg screw usually consisted of two iron plates, the shape of which was adapted to the cross-section of the lower leg . These were placed around the lower leg and then pressed together with the help of threaded rods attached to the side. In the case of simpler models, a block of wood was used that was fitted with iron rails, which in turn were guided on threaded rods. Some versions were only used to clamp the foot .

The particular painfulness of using the Spanish boot is due to the anatomically very superficial position of the tibia on the front of the lower leg (and, depending on the height at which the instrument was placed on the lower leg, also of the fibula on the outer side of the lower leg), the coating of the bones with very schmerzempflindlicher bone skin (periosteum) which only slightly pronounced soft tissue layers between the skin and the bony structures ( subcutaneous fatty tissue , connective tissue , muscle ), so that the pressure exerted by the tightened threaded rods is able to compress the latter in a very direct way.

To make the pain even worse, wooden wedges of different lengths and thicknesses were sometimes knocked between the boards.

With forced and protracted use, the screw boot is suitable for causing heavy tissue bruises , bleeding , a so-called muscle compression syndrome , broken bones and permanent damage .

The instrument was first used in Spain , but has been widespread almost all over Europe since the 16th century , although it was of secondary importance in the Inquisition and witch trials . There it served almost exclusively the territion .

The Spanish boot remained in use in Europe until the middle of the 18th century. Prussia was the first state to abolish this torture instrument .

In Viennese language , the torture with the screw-on boot left the expression " somebody's calves four straight " ( "bring someone rudely to behave well" ).