In the early days of telephony technology, the Bell telephone was used for voice transmission . Only one component was used for speaking and listening. When speaking, an induction voltage (alternating speech voltage) was generated, which was transmitted to the remote station via a line; a separate power supply was not available. This form of transmission soon no longer met the requirements in terms of range and quality of communication. Telephones ( telephone sets ) with separate components for speaking ( microphone ) and listening (remote receiver) have been developed. A power supply was required to operate the microphone. In terms of operation, the development led to the use of a battery installed at the participant's premises ("local battery"; OB operation) to a battery installed centrally "in the office" ("central battery"; ZB operation). In order for the microphone to be supplied with battery voltage, but not to have direct current flowing through the receiver, a corresponding intercom switch is required for the telephone set ("intercom station") depending on the operating mode. When using an O rts b atterie one speaks of the OB-operation and the OB-common battery , wherein Z entral b atterie from ZB-operation and the ZB-common battery .

In OB operation , also known as local operation , the voltage source for feeding the microphone is located on the spot, i.e. at the subscriber. No direct current flows in the line, only the alternating speech current inductively transmitted to the line. The disadvantage of OB operation compared to ZB operation is the greater technical effort in the call station and the need to operate a separate voltage source or high-maintenance battery or rechargeable battery for each call station . In telephony technology, OB operation also stands for field telephone systems that do not have their own devices for automatic self-dialing. 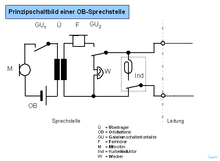 In the OB call station circuit, the microphone of the call station (telephone set) is inductively coupled to the line in a special circuit by means of a transformer . The remote receiver is on the line.

The OB technology of field telephones is simpler and more reliable than the more modern self-dialing technology with pulse dialing , because one-sided ground connections cannot cause dialing faults or a failure of the telephone lines, which are often temporarily laid. The combination with TF technology and alternating current telegraphy is also possible over short distances. 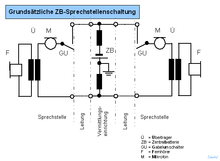 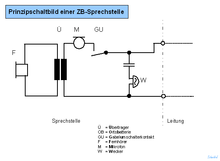 With the ZB intercom switch, the microphone of the intercom (telephone set) is on the line. The remote receiver is inductively coupled to the line in a special circuit by means of a transformer .

All modern public telephone networks in the fixed network work in principle in ZB mode and allow self-dialing .

A special transformer with a specially wound primary coil has been used since the 1920s. This consists of two counter-wound coil windings with a center tap. Since the microphone is connected between the line and the center tap in today's circuit, the signal from your own microphone cancels out for the most part due to the oppositely wound primary coil ( hybrid circuit for the back hearing loss), while the other participant can be heard unchanged through the remote receiver. Up until the 1960s, this back loss was subject to continuous further development by adding capacitors and resistors. Since the late 1980s, the transformer has been simulated using resistor bridges in conjunction with electronic IC amplifier circuits.

Disadvantages of the ZB operation

A failure of the central power supply can render the telephone network and the individual ZB devices inoperable. In addition, the pipeline network must meet higher insulation requirements. That is why field telecommunication networks were often implemented as OB networks.