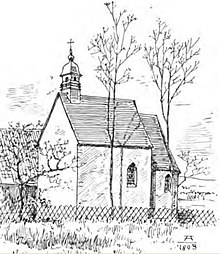 St. Aegidius is a Roman Catholic Romanesque chapel in the Frechen district of Hüächen ( Rhein-Erft district ) in North Rhine-Westphalia .

The St. Giles Chapel was originally a church belonging to a Benedictine nunnery in Koenigsdorf . The first documentary mention was made in 1175. The inscription 1697 on the portal suggests a major restoration measure at this time. The chapel is the oldest building in the area of ​​the city of Frechen. Since the secularization of the Königsdorf monastery, the chapel has been privately owned on the grounds of the Hüchelner Baumannshof.

The almost square nave of the chapel is followed by a recessed choir with a polygonal five-eighth end . The entire structure is 9.80 m long and 5 m wide. A baroque roof turret lies over the western part . The nave has a flat roof and the choir is vaulted with ribs. During construction investigations in 1960, tuff masonry from the 12th century was uncovered, which has been preserved up to the height of the former eaves. Excavations revealed dimensions of only 1.10 m in length for the originally drawn-in choir space and a constricted semicircular apse . The eaves cornice of the choir was structured by a round arch frieze. In each of the nave walls there were two high arched windows that were reconstructed on the south side. A drawing from 1893 shows a Gothic lancet window in the south wall. A low circular opening in the south wall was interpreted as a confession window.