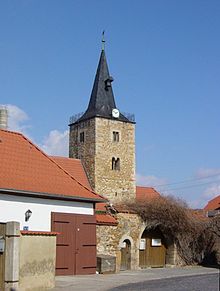 The Sankt-Nikolai-Kirche is the Protestant village church of Haarhausen in the Thuringian Ilm district . It belongs to the parish Ichtershausen-Holzhausen in the parish of Arnstadt-Ilmenau of the Evangelical Church in Central Germany .

You enter the churchyard, which is surrounded by a strong wall, through a high gate.

The origins of the church go back to the end of the 12th century. It was fortified and offered protection in the event of an attack. Excavations suggest that there were storage cellars on the wall.

Nothing is known precisely about the year the church was built. It is said to have originally been a chapel to which a nave was later added . However, this was so dilapidated in 1684 that half of the tower had to be demolished and rebuilt by 1703. The tower is probably also the oldest part of the church. Thus, the tower ground floor, spanned by a cross vault , is the oldest room in the church.

In the summer of 1971, the church, an LPG warehouse and a barn were badly damaged by arson. An emergency repair of the church roof was carried out immediately. The precious pulpit altar was preserved, although there was a fire nest directly in front of it. The valuable Hesse organ from 1785 fell victim to the flames. A cost estimate of the organ restoration had been made two days before the fire. In July 1983 a new organ was inaugurated, which comes from the organ builder Rudolf Böhm from Gotha . It has 23 registers , two manuals and a pedal .

In the course of the preparations for the 1200th local anniversary in 1986, the old cement plaster was removed and the church was reconstructed. Old building materials such as eggs, quark and cattle hair were also used to build the church tower. In the course of this work, the arched sound openings in the tower were exposed again. Shape and style indicate that it at about the same time as the Palas on the Wartburg are built, so to 1180. The tower was originally stone battlements around the top that were removed along with dealing 1887th Instead, the wrought-iron railing that still exists today was attached.

In 1991 the tower clock was converted to electronic control.