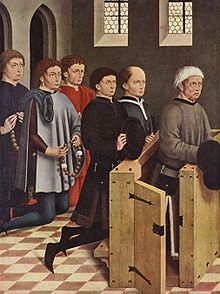 High altar retable by Friedrich Herlin in the Nördlingen City Museum, outside left wing, scene: the founder Jakob Fuchsart and his sons

The City Museum Nördlingen gives an insight into the history of the former Free Imperial City of Nördlingen . The collection, founded in 1867, is housed on four floors in the hospital building of the former Heilig-Geist-Spital .

Trade, Whitsun Mass , guilds and handicrafts as well as the jurisdiction in the medieval city are illustrated by original objects. A model with around 6,000 pewter figures illustrates the historically significant battle of Nördlingen , which was fought in front of the city ​​walls in 1634 during the Thirty Years' War .

Numerous panel paintings from the 15th and 16th centuries, especially by Friedrich Herlin , Hans Schäufelin and Sebastian Taig, bear witness to the religious life, but also to the wealth and political importance of the city of Nördlingen.

The historical tour through the settlement history of the Ries from the Paleolithic to the Middle Ages is completed with the skull finds from the Ofnet caves , the hoard from Bühl im Ries and the finds from the Roman Villa Rustica near Holheim .

Since its establishment in 1959, the city museum has also housed the collection of the Heimatverband Kreis Tetschen-Bodenbach eV